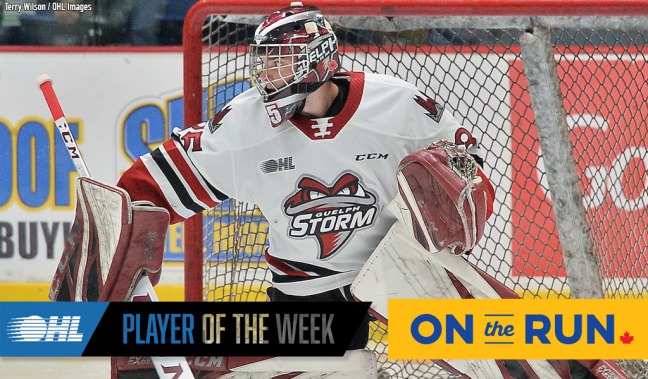 Toronto, Ont. – The Ontario Hockey League today announced that Guelph Storm goaltender Nico Daws is the OHL ‘On the Run’ Player of the Week for the week of regular season action ending October 27 with a 3-0-0-0 record, 1.95 goals-against average, .949 save percentage and one shutout.

Daws helped the defending OHL champion Storm win three straight as they improved to 6-4-1-2 in a highly competitive Midwest Division. Daws got things started bright and early on Wednesday in Erie, turning aside 45 shots before stopping three of four shootout opponents as the Storm took a 4-3 win over the Otters. He was back in the crease on Friday for Guelph’s 9-3 win over visiting North Bay that included 31 saves as the Storm were outshot in the lopsided outcome. Daws collected his second shutout of the young season on Sunday, stopping all 35 shots he faced as the Storm overcame the visiting Mississauga Steelheads 4-0, being outshot 35-28.

A 6-foot-4, 18-year-old native of Burlington, Ont., Daws currently leads the OHL in goals-against average (2.30), save percentage (.938) and shutouts (2) while playing to a record of 4-1-1-2 over eight games. The third-year netminder hoisted the Robertson Cup as an OHL Champion last spring and has played to an OHL record of 15-13-3-5 with a 3.26 goals-against average and .900 save percentage over 42 career regular season games. He was Guelph’s seventh round pick in the 2016 OHL Priority Selection from the Burlington Eagles Minor Midgets.

Also considered for the award this week was Ottawa 67’s overage defenceman Noel Hoefenmayer who collected seven points (1-6–7) over a pair of victories, scoring a late third period game winner on Friday. Washington Capitals prospect Connor McMichael of the London Knights also turned in a strong performance this past week, recording eight points (4-4–8) over three outings.