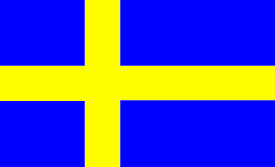 There are no Ontario Hockey League players on the Swedish entry at the 2018 Hlinka-Gretzky Cup – after all this is an OHL blog and our primary objective is those players.

But if you are a draft junkie then the Hlinka-Gretzky Cup is when it all begins for players hoping to be selected at the 2019 National Hockey League Draft. TSN will carry every game beginning August 6, 2018 and streaming all games live as well in Canada while the NHL Network will televise the games in the United States.

Sweden has an interesting team, bring along three players that won’t be eligible for the NHL Draft until 2020, including goaltender Jesper Wallstedt. Sweden does have four goaltenders listed on their roster, so one of them might just be staying home.

They also have a couple of behemoth forwards in Jacob Grönhagen and Elmer Söderblom who both stand at 6’6” and 209 and 214 pounds respectively. Their defence is intriguing to say the least and we’re curious to see twin brothers Joel and Max Wahlgren.

Here is the Swedish roster:

One thought on “Sweden Announces Roster for Hlinka-Gretzky Cup”