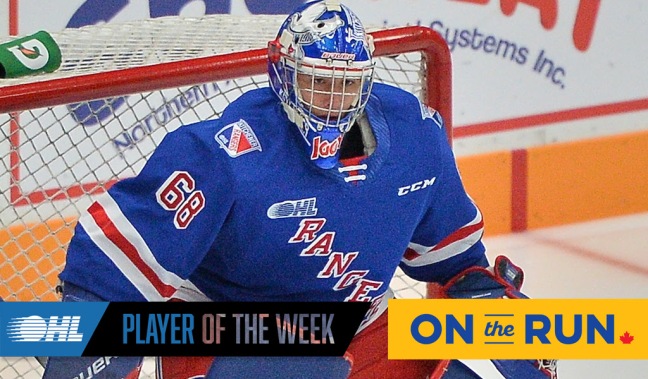 Toronto, Ont. – The Ontario Hockey League today announced that Los Angeles Kings prospect Jacob Ingham of the Kitchener Rangers is the OHL ‘On the Run’ Player of the Week with a 2-0 record, 0.50 goals-against average, .984 save percentage and one shutout.

Ingham stopped 63 of the 64 shots he faced in victories over London and Guelph, extending the club’s current winning streak to nine consecutive games. He turned aside all 28 shots that came his way on Tuesday, recording his fourth career OHL shutout as the Rangers blanked the visiting Knights 4-0. Ingham followed up that first star performance by earning second star recognition in Saturday’s 6-1 road win over the Guelph Storm as he made 35 saves, securing Kitchener’s ninth straight victory. Ingham is now 6-0 with a 1.78 goals-against average and .945 save percentage in six games since returning from an injury that sidelined him for most of the month of November.

A 19-year-old native of Barrie, Ont., Ingham owns a 12-3-2-1 record with a 2.78 goals-against average and .922 save percentage over 18 games this season. The fourth-year netminder joined the Rangers this past offseason following three years spent with the Mississauga Steelheads who originally selected him in the second round (26th overall) of the 2016 OHL Priority Selection. The 6-foot-4, 198Ib. puckstopper was selected by the Los Angeles Kings in the sixth round of the 2018 NHL Draft.

Also considered for the award this week was Guelph Storm scorer Pavel Gogolev who racked up eight goals and an assist over four games last week. Peterborough Petes rookie Mason McTavish was also productive, scoring five times over a pair of victories to become the CHL’s first rookie 20-goal scorer of the 2019-20 season.