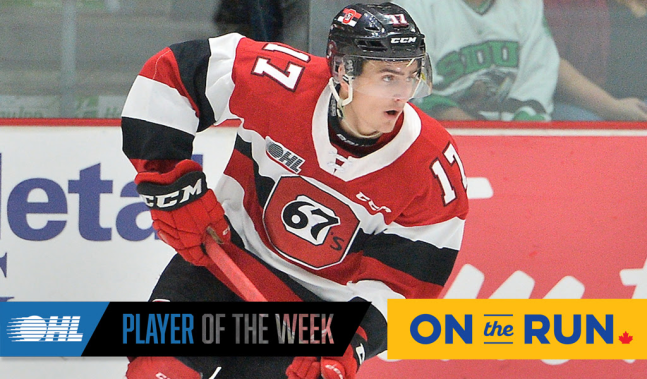 Toronto, Ont. – The Ontario Hockey League today announced that New Jersey Devils prospect Mitchell Hoelscher of the Ottawa 67’s is the OHL ‘On the Run’ Player of the Week with a league-leading eight points including five goals and three assists over three games.

Hoelscher becomes the third different Ottawa player to earn the distinction this season, helping the CHL’s top-ranked 67’s take three straight victories to improve to 34-7-0-0. The veteran centreman scored in Friday’s 5-4 shootout win over the Flint Firebirds before registering a career-high four points, collecting a goal and an assist on both the power play and penalty kill in a 5-0 blanking of the Hamilton Bulldogs. Hoelscher wrapped up the weekend with two goals and an assist as Ottawa skated to a 5-3 road win over the Oshawa Generals, maintaining a nine-point cushion atop the Eastern Conference standings.

A soon-to-be 20-year-old native of Elora, Ont., Hoelscher has points in seven of his last eight games, contributing to an overall total of 53 (25-27–53) in 41 games to go with a plus/minus rating of plus-34. The third-year veteran has collected 123 points (48-75–123) over 182 career OHL regular season games and proved valuable in Ottawa’s Eastern Conference title last spring, picking up 13 points (6-7–13) over 18 playoff contests. The Waterloo Wolves Minor Midget graduate was a third round (56th overall) pick in the 2016 OHL Priority Selection. The Devils selected Hoelscher in the sixth round (172nd overall) of the 2018 NHL Draft.

Also considered for the award this week were Carolina Hurricanes first round pick Ryan Suzuki of the Saginaw Spirit who recorded seven points (4-3–7) over three games along with Hoelscher’s Ottawa 67’s teammate Jack Quinn who also put up seven points (5-2–7) over three outings.