Toronto, Ont. – The Canadian Hockey League announced today the Week 2 edition of the Kia CHL Top-10 Rankings for the 2021-22 season.

A perfect opening week to the season has the London Knights climbing from an honourable mention in Week 1 into the sixth slot this week. The Knights scored consecutive victories over the Owen Sound Attack to open the season before edging the Windsor Spitfires 4-3, requiring an eight-round shootout marathon to get the job done on Thanksgiving Monday. Newly named Knights captain and Nashville Predators prospect Luke Evangelista sits tied for the OHL lead in goals with four through three games. Big winger Stuart Rolofs scored the first two goals of his OHL career while goaltender Brett Brochu stood tall, stopping 92 of 100 shots along with 11 of 12 shootout attempts against him over the weekend.

The Barrie Colts drop three spots down from fifth into eighth on the Top-10 following an 0-1-1-0 start to the campaign. The Colts fell to the Niagara IceDogs by a score of 4-1 on opening night in Barrie before picking up a point in a 5-4 overtime road loss to the Hamilton Bulldogs on Saturday. Colorado Avalanche first round pick Oskar Olausson was joined by Jacob Frasca with a pair of goals on the weekend. The Colts, who have been without star defenceman Brandt Clarke due to a case of mononucleosis, return to action on Thursday at home to the Soo Greyhounds.

The Kingston Frontenacs fall five spots on the list from number four in Week 1 down to nine this week. The Fronts enjoyed a promising start, defeating the Ottawa 67’s 8-1 at home on Friday as overage newcomer Lucas Edmonds led the way with four points. Things got a little rough from there though as the Mississauga Steelheads downed the Fronts 7-2 a night later on Saturday before Kingston fell 3-2 on the road in Ottawa on Sunday afternoon. Edmonds leads the Frontenacs with five points (3-2–5) through three games. Newly-named captain and top 2022 NHL Draft prospect Shane Wright joins Dallas Stars draftee Francesco Arcuri and rookie teammate Paul Ludwinski with four points thus far.

The Windsor Spitfires fell into the honourable mention category following a 1-1-0-1 start, falling 6-3 to the Sarnia Sting on opening night before rebounding to defeat the Sting 3-2 in overtime on a Will Cuylle game winner. The Spits fell to the London Knights on Monday afternoon by a score of 4-3, earning a point as they dropped a decision determined in the eighth round of a shootout. 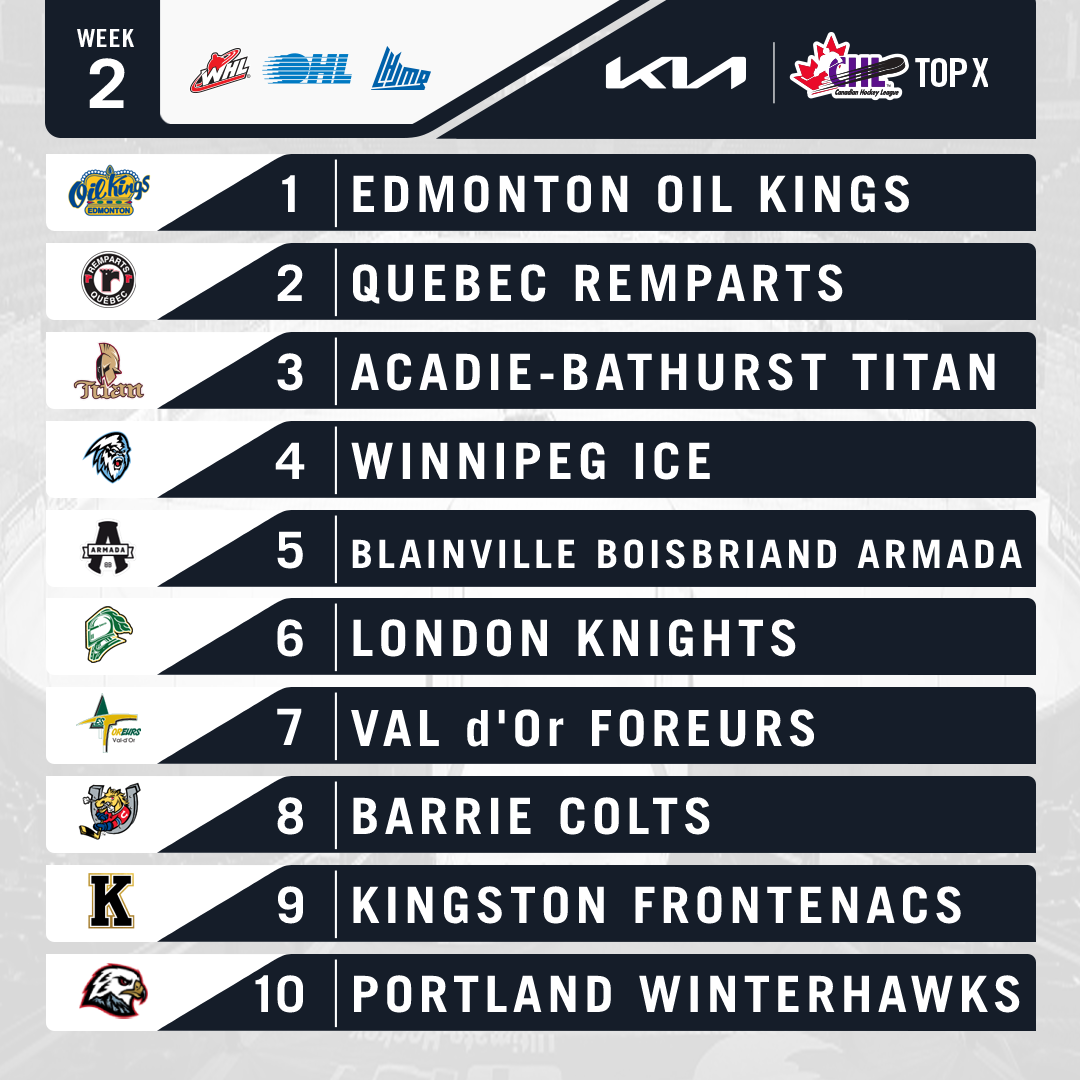 For further analysis on the Week 2 edition of the Kia CHL Top 10 Rankings, visit CHL.ca.