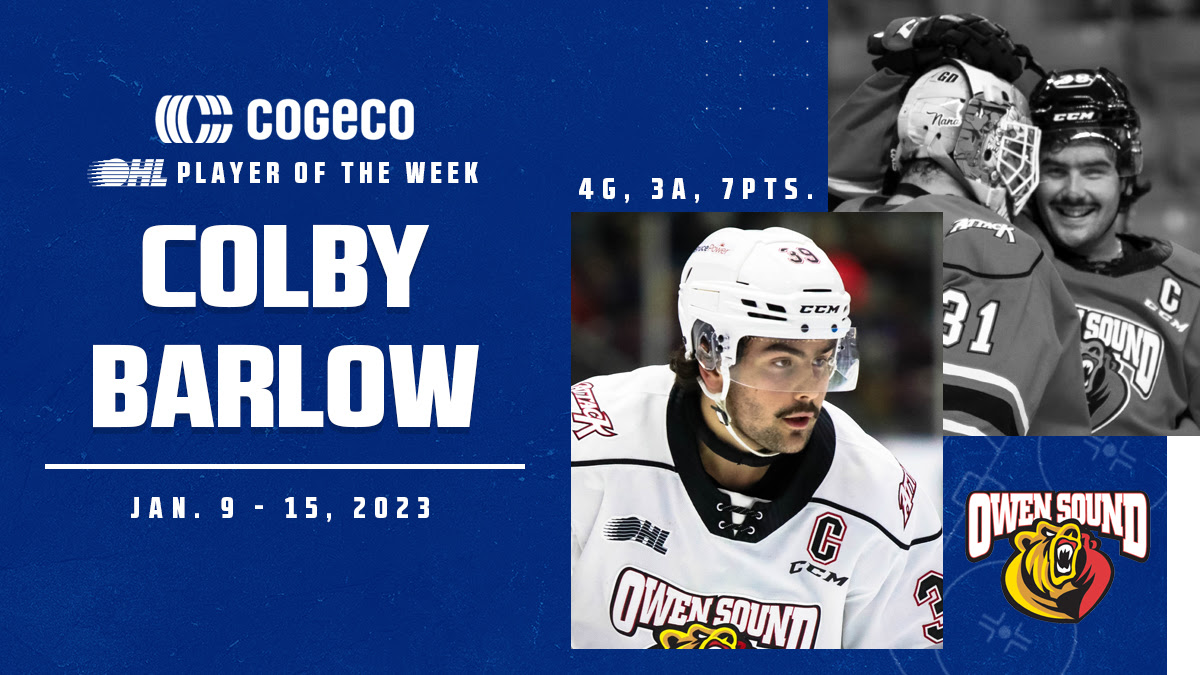 2023 NHL Draft prospect Colby Barlow of the Owen Sound Attack is the Cogeco OHL Player of the Week, recording four goals, three assists and seven points in three victories along with a plus/minus rating of plus-3.

Barlow helped the Attack gain ground in the Western Conference last week as they took wins over Niagara, Erie and Guelph. He found the back of the net as the Attack defeated the Niagara IceDogs 5-1 on Wednesday. Barlow’s scoring ways continued on Thursday as he netted a goal and added two primary assists in a 6-5 overtime win over the Erie Otters. He turned in a first star performance to close out the week on Saturday, scoring his 28th and 29th goals of the season while adding an assist in a 6-4 win over the Guelph Storm. Barlow’s second of the game was the third period game winner as he came away from Saturday’s action with goals in seven straight contests, pushing his current point streak to nine games.

A 17-year-old from Orillia, Ont., Barlow leads the Attack with 55 points (29-26–55) in 36 games this season, sitting tied for second in League goal-scoring with 29 on the campaign. Barlow’s eight game winners lead the League and his 172 shots on goal are currently the third-most in the OHL. His 10-game goal-scoring streak from Nov. 12 to Dec. 4 is the longest in the League this season, setting a new Attack franchise record. Selected in the first round (8th overall) by Owen Sound in the 2021 OHL Priority Selection from the Toronto Marlboros U16 program, the 6-foot-1, 187lb. winger scored 30 goals in 2021-22, a new Attack franchise record for a 16 or 17-year-old rookie. Barlow was listed as the OHL’s top-ranked skater on last week’s NHL Central Scouting Midseason Rankings, coming in at 10th in North America for the 2023 NHL Draft. 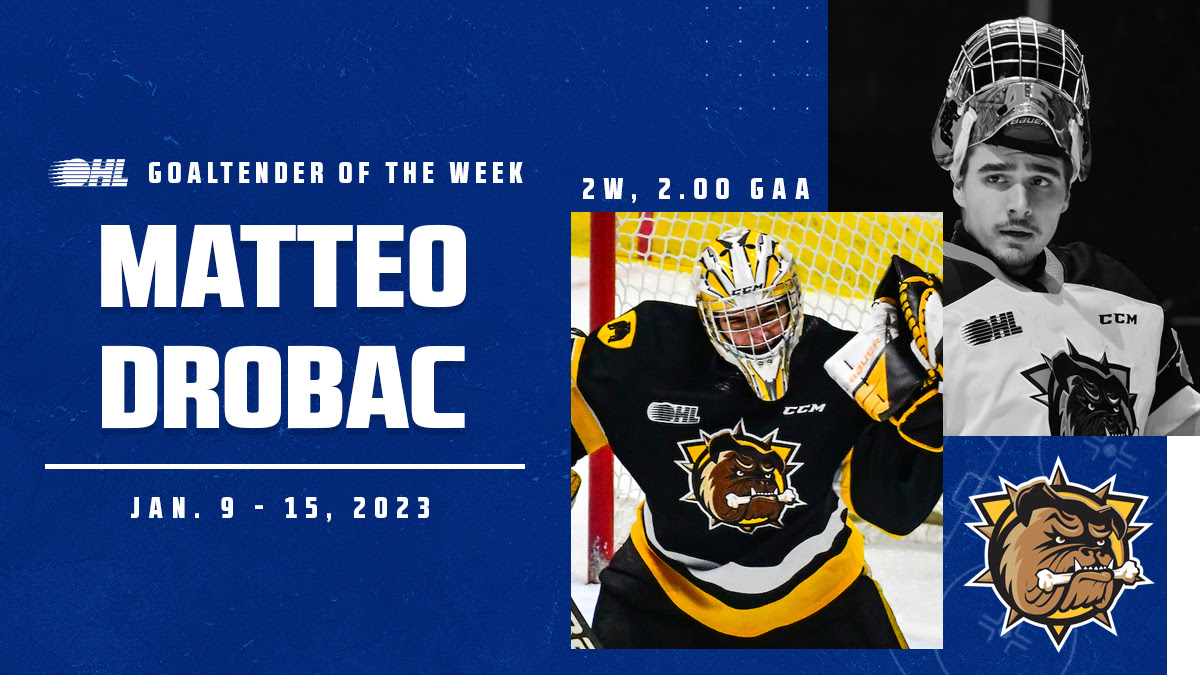 Matteo Drobac of the Hamilton Bulldogs is the OHL Goaltender of the Week with two wins, a goals-against average of 2.00 and a save percentage of .949.

Drobac backstopped the Bulldogs to back-to-back road wins, starting with a 35-save effort on Friday night in Ottawa as the Bulldogs handed the first place 67’s a second home loss in under a month in a 4-3 decision. Drobac was excellent again on Saturday, making 40 saves to earn second star recognition in a 4-1 victory over the Kingston Frontenacs.

A 19-year-old native of Oakville, Ont., Drobac owns a record of 10-12-2-0 on the season with a 3.28 goals-against average and an .893 save percentage. The 6-foot-2, 201lb. netminder helped the Bulldogs win an OHL championship last year, joining Marco Costantini in winning the Dave Pinkney Trophy for fewest team goals-against by going 19-2-1-0 during the regular season with a 2.57 goals-against average and .905 save percentage in 23 games. He was selected in the sixth round (110th overall) by the Bulldogs in the 2019 OHL Priority Selection from the Halton Hurricanes U16 program.