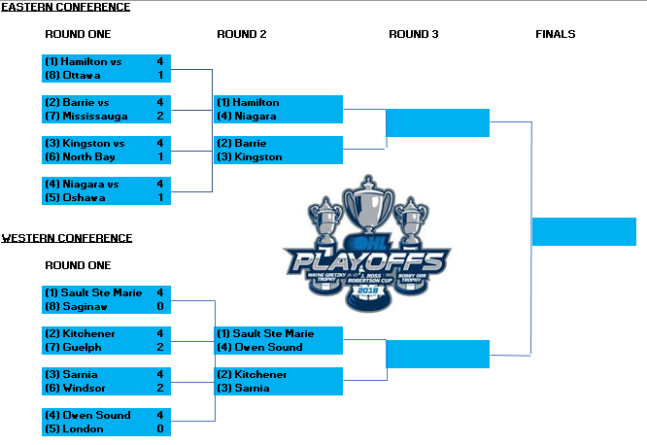 Over the years, the one thing I have been most proud of is my record on predictions. Despite getting six of eight correct, and four of those six in the correct number of games, picking London to defeat Owen Sound and Oshawa to defeat Niagara in seven games and having them end the way they did is, well, embarrassing.

Pick whichever cliché fits. I’ll go with “you can’t win ‘em all.” Here is a look back at the first-round predictions and results:

Round two promises to provide some interesting and competitive series which, statistically, look as though they could go in any which way. Below, we look at each series and my pick to come out on top as well as key draft eligible players to watch for.

Some of you may be surprised to find that Niagara dominated the regular season between these two clubs. But as they say. “it’s a new season.” Hamilton holds an edge in special team’s stats, but Niagara owns the head to head specialty team battles. Both teams are very good at home, but Hamilton holds a decided advantage on the road. In fact, Hamilton’s only victory over Niagara in the regular season came on the road. Three of the six games went into overtime or a shootout, so this series could be very close.

Draft eligible players to watch: Barring injury, backup goaltender Nick Donofrio likely won’t see any starts and is the only first-time draft eligible player to earn a ranking from NHL Central Scouting. Brandon Saigeon however, re-enters the draft and is a player to watch.

For Niagara, Akil Thomas is projected to go in the first round at the draft in June and will be key for Niagara. Justin MacPherson could be a late round pick.

Just like the Hamilton/Niagara matchup, this is a series in which the lower seed held the advantage during the regular season. Again, both teams are strong at home, but Barrie held a decided advantage on the road. But both teams won in the other’s barn.

Both teams loaded up for a playoff run and are split in head-to-head matchups since doing so.

Draft eligible players to watch: For Barrie, obviously it’s Andrei Svechnikov, who will be the first player taken from the OHL in June. But also keep an eye on menacing defenceman Tyler Tucker, who is coming off a very good performance in the opening round.

For Kingston, there is Linus Nyman who re-enters the draft and is a possible late round pick.

Wow. If only Owen Sound had done something to upgrade their goaltending at trade deadline, this would have been the series to watch. But even so, every advantage goes to the Greyhounds. Luckily for the Attack, the games are played on the ice.

Draft eligible players to watch: The Greyhounds have two potential first rounders in Barrett Hayton and Rasmus Sandin. They also have Mac Hollowell who re-enters the draft.

The Attack have two players who re-enter the draft and should garner a lot of attention. Sean Durzi and Brady Lyle man the blueline. Aidan Dudas is a little fireplug who is eligible for the first time and a must watch.

Flip a coin. About as even a matchup as you will find, though Sarnia holds the advantage on offence. This will come down to home ice. Two of Kitchener’s victories over Sarnia were decisive, but in Sarnia’s lone win went to a shootout.

Draft eligible players to watch: Sarnia’s lone player to watch re-enters the draft, Hugo Leufvenius. There is a trio of Rangers to keep an eye on in Giovanni Vallati, Riley Damiani and Adam Liska. Also, Rickard Hugg re-enters the draft.