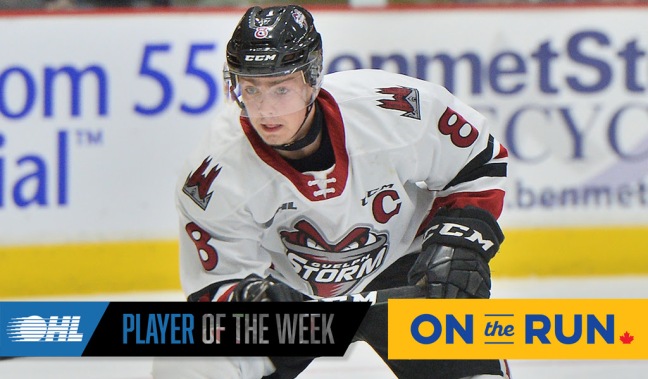 Toronto, Ont. – The Ontario Hockey League today announced that Montreal Canadiens prospect Cam Hillis of the Guelph Storm is the OHL ‘On the Run’ Player of the Week with seven points including two goals and five assists over two weekend contests.

Hillis becomes the second Storm player to win the award in the past three weeks after goaltender Nico Daws recently received the honours. The third-year centreman helped the Storm win back-to-back games, extending their current winning streak to six. Hillis scored twice and added two assists while going 15-for-24 in the faceoff circle on Friday in Kitchener as the Storm doubled-up the rival Rangers 6-3. After a first star performance to start the weekend, Hillis earned second star honours on Saturday, picking up three assists as the Storm defeated the visiting Kingston Frontenacs 4-2. He helped set up teammate Cedric Ralph for the third period game winner as the Storm overcame a 2-0 deficit.

A 19-year-old native of Enniskillen, Ont., Hillis has rebounded strong from an injury riddled 2018-19 campaign that saw him hoist the Robertson Cup as an OHL champion with the Storm. Hillis sits second in club scoring with 27 points (7-20–27), 24 of which he has gathered over the course of the last 10 games. The 5-foot-11, 174Ib. forward was a third round (66th overall) pick of the Canadiens in the 2018 NHL Draft and was originally obtained by the Storm in the second round (29th overall) of the 2016 OHL Priority Selection. The York-Simcoe Express Minor Midget grad was an OHL Cup champion in 2016.

Also considered for the award this week was Washington Capitals prospect Connor McMichael of the London Knights who recorded seven points (2-5–7) over a pair of Knights victories, holding down the OHL scoring lead with 41 points (19-22–41). Draft eligible Sudbury Wolves forward Quinton Byfield was also considered after recording five points (2-3–5) in a pair of multi-point performances that each led to Wolves victories.