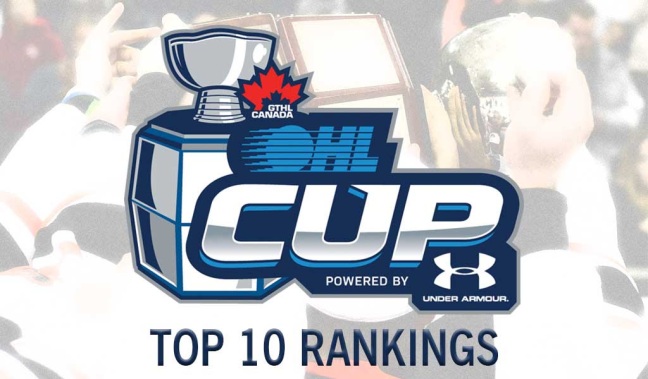 Toronto, Ont. – The Ontario Hockey League today announced the fourth edition of the weekly minor midget rankings for the 2020 OHL Cup Showcase Tournament powered by Under Armour and hosted by the Greater Toronto Hockey League.

The 2020 OHL Cup powered by Under Armour and hosted by the GTHL is scheduled for March 17-23 and will feature 20 teams from across Ontario and the United States showcasing many of the top players eligible for the 2020 OHL Priority Selection.  All games will be played at Scotiabank Pond in Toronto until the Championship Final moves to the Mattamy Athletic Centre on Monday, March 23.

There weren’t too many changes to the Week 4 edition of the OHL Cup Powered by Under Armour Top 10 Rankings, but the Toronto Nationals did move back up into the seventh spot, pushing the Waterloo Wolves into eighth. The Mississauga Senators make their first appearance inside the Top 10 after being an honourable mention last week. The Sens are riding a four-game winning streak and own an 11-8-4 record for sixth in the GTHL standings.

History:
Last season the Don Mills Flyers overcame a 4-1 deficit to defeat the Toronto Red Wings 6-5 as Shane Wright (Kingston Frontenacs) set up Brennan Othmann (Flint Firebirds) for the overtime winning goal. The Flyers added both OHL Cup and GTHL Championships to their incredible season that saw them lose just once. An exceptional status player who was selected by the Kingston Frontenacs with the first overall pick of the 2019 OHL Priority Selection, Wright was named Tournament MVP with 18 points over seven contests, one shy of Connor McDavid’s 2012 event record.