Antonio Stranges played for both Little Caesars Under-16 and Under-18 squads during the 2017-2018 season and there was a lot of promise heading into the 2018 Ontario Hockey League Priority selection where the London Knights selected him with the first pick in the second round of the draft.

The promise that was tagged to Stranges was so high, that OHL Central Scouting had this to say about him prior to the draft:

Antonio is one of the most skilled players in this year’s Priority Selection. He is a player that has the ability to take over a game and he did this on numerous occasions this season. He is an electric skater with breakaway speed. His skill set and his ability to read the play allow him to create scoring chances almost at will. He is a natural playmaker that makes everyone around him better. He sees the play developing well before others and he is very creative with the puck on his stick.

Stranges broke into the OHL a season ago and appeared in 66 games scoring 13 goals and adding 21 assists. He would add 2 helpers in the Knights 11 playoff contests. 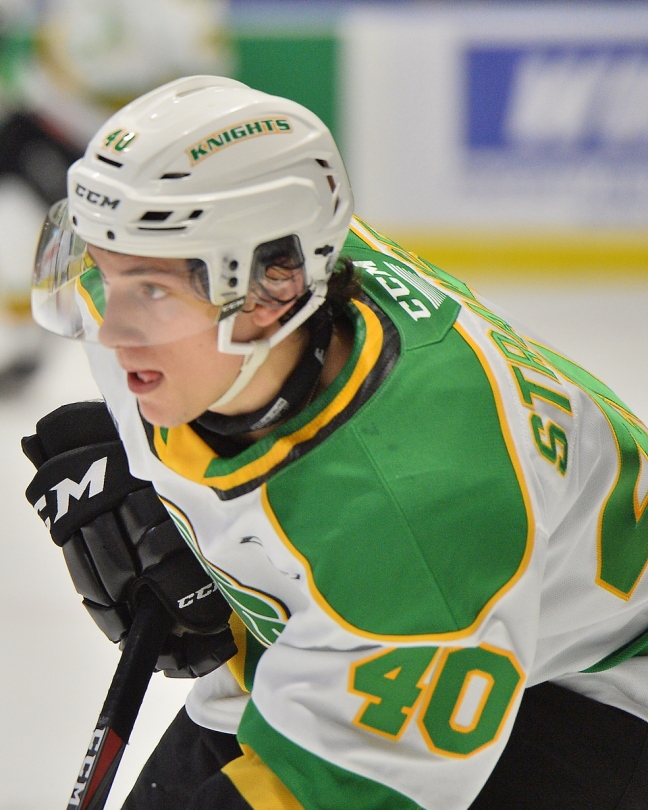 To date this season, Stranges has appeared in 51 games scoring 18 goals and 20 assists. And despite being a second-year player and truly an offensively gifted player, he doesn’t get the prime minutes with the Knights because of the depth they have. And that is almost always the motto of a Dale Hunter coached team: learn the 200-foot game.

The first thing you notice about Stranges is his skating. While OHL Central Scouting called it electric, I call it elite. He has superb edgework, and uncanny ability to slow down and speed up and has top level speed and first steps. However, if there is one knock I have on his skating, it’s that he uses the 10-2 that we seen the likes of Ryan Spooner and others use way too often. While he can get away with using it as often as he does at this level, he’s going to have to pick his spots at the next level.

The next thing you notice is his puck handling skills. It’s almost as though he has the puck on a string and he can work magic with it. Once he’s in possession, it is difficult to separate him from the puck. But I do have a small knock on him there as well. He too often plays the game on the outside, looking to make plays from the outside rather then going into the high scoring areas. He’s capable of it, but I think to be successful at the next level, he has to be near elite to do so, and he’s not quite there. He’ll need to find a balance and maybe the confidence to drive to danger areas will come once he adds to his 5’10”, 178-pound frame.

Stranges has very good vision and playmaking abilities, and he can play patiently. He has the ability to slow things down, draw people to him and use his patience to allow a play to develop and dish the puck with accuracy.

Playing a 200ft game is something Stranges is going to have to develop. Too often I find the lack of effort to backcheck and defend frustrating. And may be a reason Coach Hunter doesn’t give him prime minutes. It’s not something to be overly concerned about as many a player has shown to find that part of their game as they mature. But it is something that will make your draft stock drop in the meantime.

The last issue is consistency. I haven’t seen it enough to date, but if he can find it through the end of the season and through the playoffs, it could go a long way in maintaining his draft position.