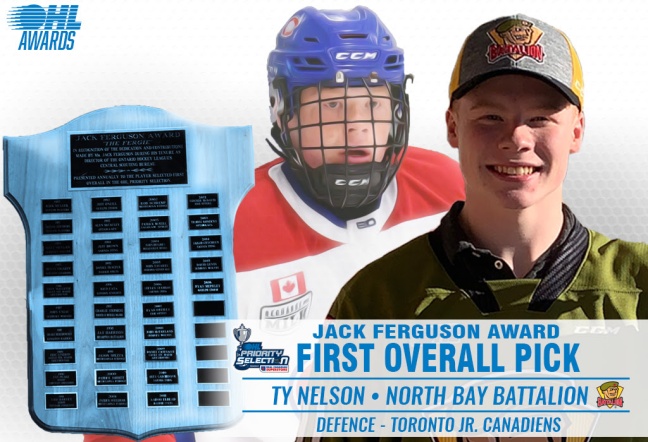 The ‘Fergie’ recognizes the dedication and contributions made by Jack Ferguson during his 25 year association with the OHL, first as a scout with the Ottawa 67’s and followed by his appointment as head of the OHL’s Central Scouting Bureau in 1981 as its Director of Central Scouting.

“It is an absolute honour to win such a prestigious award,” Nelson said of his name being engraved on the hardware. “I want to start by thanking my parents Rick and Tracy along with my sister Peyton. Without their sacrifice and dedication this truly wouldn’t be possible. Thank you to Mr. Abbott and his family and the whole North Bay organization. I would also like to thank my past teachers and coaches who have helped me out along the way.

“To have my named mentioned with elite players such as Jason Spezza, John Tavares, Steven Stamkos, Aaron Ekblad, Connor McDavid and Jakob Chychrun is very special,” he added. “I’m super excited to be a part of the North Bay community and franchise.”

Selected first overall by the North Bay Battalion in last month’s 2020 OHL Priority Selection, Nelson led the GTHL champion Toronto Jr. Canadiens from the blue line, pacing all defenders with 32 points (11-21–32) per 33 games before leading the way in playoff scoring amongst GTHL rearguards with 12 points (1-11–12) over 11 outings. The 16-year-old Toronto native was a member of Canada’s bronze medal-winning team that competed at the 2020 Youth Olympic Winter Games in Lausanne, Switzerland this past January. A swift-skating, puck-moving defenceman that stands 5-foot-8 and 174Ibs., Nelson was born March 30, 2004, making him eligible for the 2022 NHL Draft.

“The North Bay Battalion are looking forward to having Ty Nelson join our young, talented group of players,” said Battalion general manager Adam Dennis. “We feel that he is ready to make an impact immediately with his fast paced style and high-end character. Ty is very deserving of the Jack Ferguson Award and joins an impressive list of past winners. We would like to congratulate Ty and his family on receiving this prestigious award.”

2020 OHL Awards announcements continue on Wednesday when the League reveals its Leo Lalonde Memorial Trophy recipient as Overage Player of the Year.