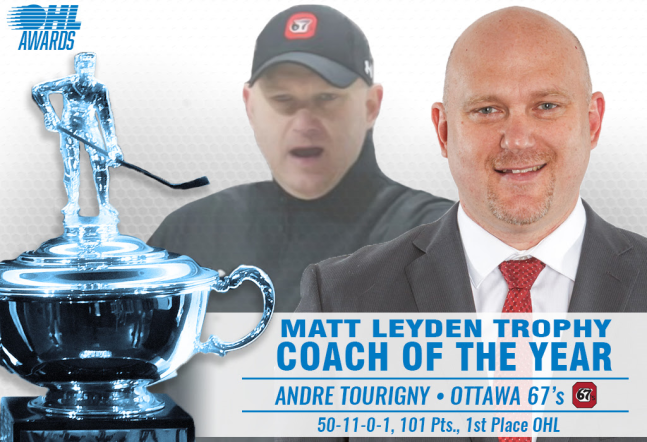 Toronto, Ont. – The Ontario Hockey League today announced that, for the second straight season, Andre Tourigny of the Ottawa 67’s is the recipient of the Matt Leyden Trophy awarded annually to the OHL’s Coach of the Year.

Tourigny, who was a member of Canada’s gold medal-winning National Junior Team coaching staff, steered the 67’s to a second straight Hamilton Spectator Trophy atop the OHL regular season standings with a record of 50-11-0-1. Just as they did in 2018-19, the 67’s equalled their franchise record-tying mark of 50 wins, doing so in six-fewer games as a result of the abbreviated schedule. The Barber Poles led the League in goals for (296), surrendered the fewest against (164), owned the OHL’s top power play (29.8%) and third-ranked penalty kill (82.1%). They led all clubs in both home (26) and road (24) wins and strung together a franchise record 17-game winning streak that spanned from November 16 to January 10.

“It’s a tremendous honour and a great feeling to be chosen by my peers. Even though my name is on this award, it is truly a team effort,” said Tourigny. “This recognition is a testimony of the quality of our program and of the quality of the people I’m working with. Our coaching staff, support staff, development staff and our strength and conditioning staff are a fantastic group and it truly is a blessing to work with them every day. Our management creates a professional and dynamic environment and is always there to support us. The commitment of our owners and OSEG management is unparalleled and is a source of energy on a daily basis in our office. They provide the ideal environment to succeed every day for all of us. Finally, I want to thank our players for their sacrifice and their relentlessness every single day.”

Tourigny joined the 67’s as head coach and vice president of hockey operations prior to the franchise’s 50th anniversary season in 2017-18. The 45-year-old Nicolet, Quebec native became the ninth coach in 67’s history with an impressive track record behind the bench primarily in the QMJHL where his career began as an assistant coach with the Shawinigan Cataractes in 1998.  He joined the Rouyn-Noranda Huskies as head coach and general manager in 2002 where he spent 11 seasons and set a QMJHL record for most games coached with one franchise at 693 and earned Coach of the Year honours in 2005-06.  He moved up to the NHL ranks and spent two seasons as an assistant coach with the Colorado Avalanche from 2013-15, then one season with the Ottawa Senators in 2015-16.  He returned to the QMJHL for one season as head coach of the Halifax Mooseheads in 2016-17 before returning to the nation’s capital. He owns an overall OHL head coaching record of 130-52-10-6 over three seasons with the 67’s.

“Andre has been the driving force behind the continuous improvement of our hockey club with his nurturing style, relentless attention to detail and ability to marshal players and staff throughout the season,” said 67’s general manager James Boyd. “It is fitting that Andre be recognized with this prestigious award for the second consecutive season.”

The Matt Leyden Trophy has been awarded annually to the OHL’s Coach of the Year as selected by his peers since 1972.  The award is in recognition of the contributions of Matt Leyden, past president of the Ontario Hockey Association from 1965-67, and former manager of the Oshawa Generals who spent more than 50 years with the team.

Tourigny becomes the first back-to-back recipient of the award since Windsor’s Bob Boughner in 2008 and 2009. The list of back-to-back winners also includes 67’s coaching legend Brian Kilrea (1981 and 1982, 1996 and 1997) who accomplished the feat twice along with Dale Hunter (London, 2004 and 2005), Peter DeBoer (Plymouth, 1999 and 2000) and George Burnett (Niagara Falls, 1991 and 1992). Kilrea holds the League record with five Coach of the Year honours while others to win the award multiple times include the aforementioned Boughner, Hunter, DeBoer and Burnett along with Bert Templeton, Terry Crisp, Craig Hartsburg, Gary Agnew and Mike Vellucci. Joining Tourigny as other recent recipients include Drew Bannister (Sault Ste. Marie, 2018), Ryan McGill (Owen Sound, 2017), Kris Knoblauch (Erie, 2016), Sheldon Keefe (Sault Ste. Marie, 2015) and D.J. Smith (Oshawa, 2014).

Tourigny will be the OHL’s nominee for Canadian Hockey League Coach of the Year Award to be announced in the coming weeks.

2020 OHL Awards announcements continue on Tuesday when the OHL recognizes its Dan Snyder Memorial Trophy recipient as the League’s Humanitarian of the Year presented by Kia.