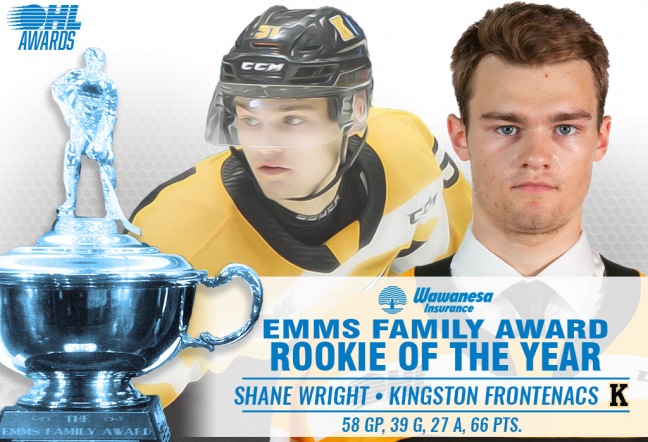 Toronto, Ont. – The Ontario Hockey League today announced that forward Shane Wright of the Kingston Frontenacs is the 2019-20 recipient of the Emms Family Award handed out annually to the OHL’s Rookie of the Year presented by Wawanesa Insurance.

“Wawanesa Insurance is proud to present the OHL Rookie of the Year award to Shane Wright of the Kingston Frontenacs,” said Selena Hinds, Vice President of Brand, Community and Communications for Wawanesa Insurance. “Although the season was abbreviated, fans still had the opportunity to see some terrific hockey, with Shane Wright’s skill really standing out. We are excited to see what the future holds for you, Shane – way to go!”

Wright joined the League as the first overall pick in the 2019 OHL Priority Selection after he was granted exceptional status by Hockey Canada as a 2004-born player. Wright had a remarkable first season, setting a new Frontenacs franchise rookie record with 39 goals while leading all OHL newcomers with 66 points (39-27–66) over 58 games. His rate of 1.14 points-per-game is the second-highest by an exceptional status rookie trailing John Tavares (1.18) in 2005-06.

“It’s a huge honour to win the Emms Family Award as the Rookie of the Year,” said Wright. “This was one of my goals coming into the season and I’m very honoured.

“My family has sacrificed so much for me to be where I am today and I’m so thankful for that,” he continued. “My coaches this year were amazing and I learned so much from them. My billets, Andrea Cartile and Nelson Martins were amazing and made my transition to Kingston smooth and easy. Finally, I’d like to thank my teammates for always having my back and pushing me to be the best player I can be.”

The Burlington, Ont. native and graduate of the OHL Cup champion Don Mills Flyers Minor Midget program scored his first OHL goal on September 29 in Oshawa, the first of what would become 39 markers to eventually break Bernie Nicholls’ franchise rookie mark of 36 that dated back to 1979-80. Wright would put together 17 multi-point games and receive three star recognition 15 different times, being recognized as first star of the game on six occasions. Notable moments included his league-leading three overtime game winners scored on October 11 against Niagara, January 20 against Hamilton and February 21 against Oshawa. He scored his first OHL hat-trick as part of a season-high four-point performance on February 29 in Flint. Despite his underage status, Wright was recognized in the 2019-20 OHL Coaches Poll as the second-smartest player in the Eastern Conference trailing Ottawa’s Marco Rossi. He became the youngest assistant captain in CHL history when the Frontenacs assigned him an ‘A’ in December.

“The Kingston Frontenacs organization would like to congratulate Shane on winning the Ontario Hockey League’s Emms Family Award,” said Frontenacs general manager Darren Keily. “It is an incredible honour for any player, but to claim the award as an exceptional status player makes it that much more special for Shane, his family, friends, billets, and teammates.

“Shane has just basically scratched the surface of what his potential is,” Keily added. “That’s what makes his and our future so exciting. We are blessed to have the opportunity to watch him grow as a player.”

The Emms Family Award was donated by Leighton “Hap” Emms, former owner of the Barrie, Niagara Falls, and St. Catharines OHL franchises.  The award is selected by all 20 member club General Managers.  Teams were asked to submit only one nominee from their own club for consideration on the ballot and were not permitted to vote for the player from their own hockey club.

Wright will be the OHL’s nominee for CHL Rookie of the Year Award to be announced in the coming weeks.

2020 OHL Awards announcements continue on Tuesday when the OHL recognizes its Jim Rutherford Goaltender of the Year Award recipient.