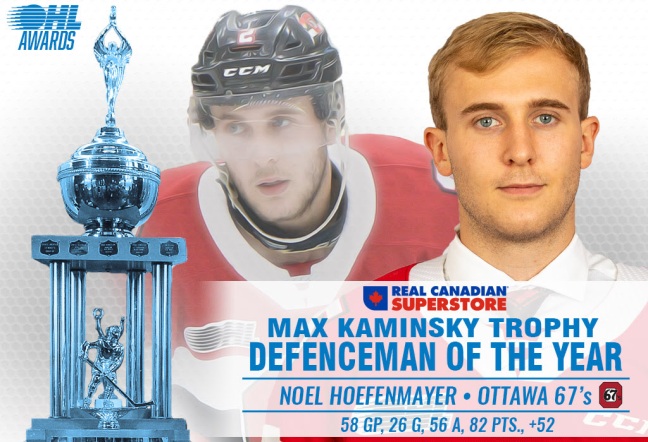 Toronto, Ont. – The Ontario Hockey League today announced that overage veteran Noel Hoefenmayer of the Ottawa 67’s is the 2019-20 recipient of the Max Kaminsky Trophy awarded annually to the OHL’s Most Outstanding Defenceman of the Year presented by Real Canadian Superstore.

Hoefenmayer led OHL rearguards with 82 points including 26 goals and 56 assists over 82 games along with a plus-52 rating, spearheading the League’s top-ranked power play from the blue line. He became the first 67’s defender to lead his position in OHL scoring since Brian Campbell in 1998-99 while racking up the most goals by a Barber Poles blueliner since Bruce Cassidy in 1983-84. His eight game winning goals led the League’s defenders, the highest single season total at the position since London’s Danny Syvret in 2004-05. Hoefenmayer earned OHL Defenceman of the Month honours in October, December and January, rounding out his season with a total of 24 multi-point performances. He received three star of the game recognition 12 different times, including six instances where he was recognized as the game’s first star.

“It’s truly an honour to be able to represent the Ottawa 67’s and win such a prestigious award like the Max Kaminsky Trophy,” said Hoefenmayer. “I would like to thank the entire 67’s organization as well as the city of Ottawa for the tremendous support that myself and my teammates have gotten over my five year tenure with the team.  This award represents a lot of people that have helped me to get to where I am today, including the coaching staff, the training staff, Sean Young of Canadian Strength, Derek Miller of Next Gen Hockey, my billet families as well as my immediate family. Thank you!”

A 21-year-old native of North York, Ont., Hoefenmayer wraps up his accomplished five-year 67’s career sixth in all-time points by an Ottawa defenceman with 222 (65-157–222) accumulated over 298 regular season contests, the highest figure by a blueliner in club history. His 65 career goals are tied for third among franchise blueliners, trailing greats Denis Potvin and Doug Wilson. A former fourth round pick of the Arizona Coyotes in the 2017 NHL Draft, Hoefenmayer signed a two-year AHL contract with the Toronto Marlies last month. He was originally Ottawa’s second round pick in the 2015 OHL Priority Selection from the Don Mills Flyers minor midgets.

“Through hard work and perseverance Noel has showed continuous improvement throughout his junior career,” commented 67’s general manager James Boyd. “In addition to this season’s league leading offensive production, Noel has been a steady defensive presence on our blue line and is a key part of our team’s leadership group. Noel is a deserving recipient of this season’s Max Kaminsky Trophy.”

The Max Kaminsky Trophy is awarded each year to the Most Outstanding Defenceman as selected by OHL General Managers.  All 20 clubs submitted a nominee but were not permitted to vote for their own player.

The award is named in recognition of Max Kaminsky, who enjoyed a 10-year professional playing career that included four years in the NHL with Ottawa, Boston, and Montreal.  After he retired from playing, Kaminsky enjoyed a 15-year coaching career that was capped by winning the Memorial Cup with the St. Catharines Teepees in 1960.

Hoefenmayer will be the OHL’s nominee for CHL Defenceman of the Year to be announced in the coming weeks.

2020 OHL Awards announcements continue on Thursday when the OHL recognizes its Red Tilson Trophy recipient as the League’s Most Outstanding Player.