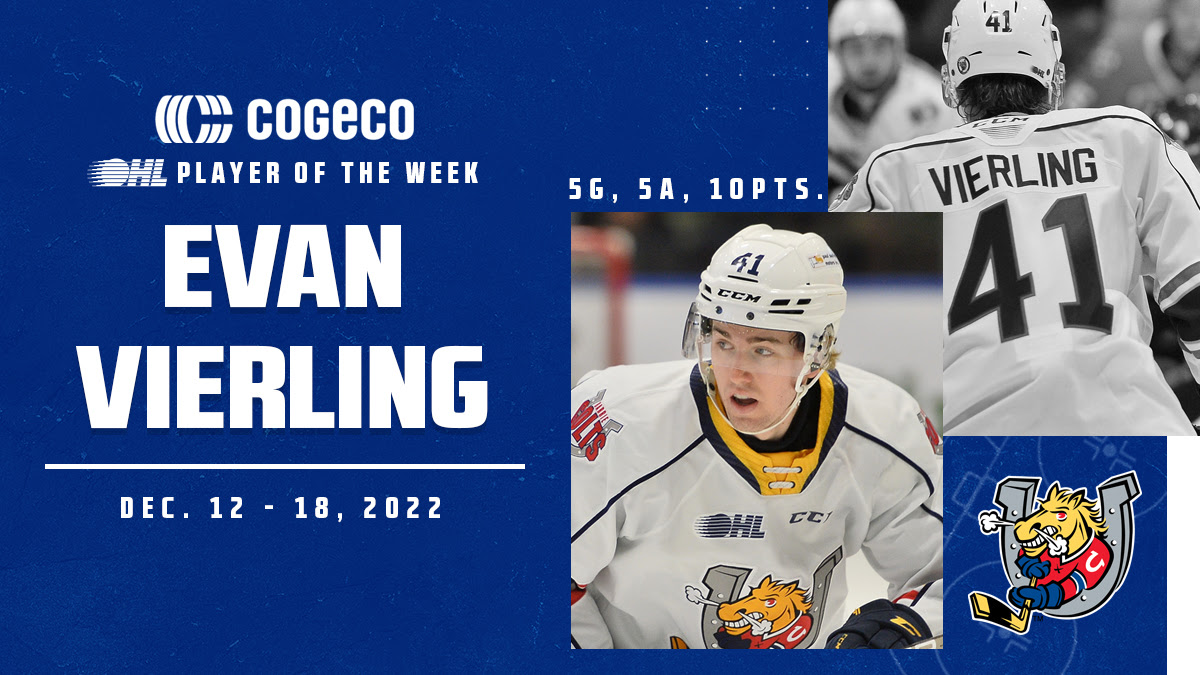 Evan Vierling of the Barrie Colts is the Cogeco OHL Player of the Week, posting five goals, five assists and 10 points as the Colts won three of four contests last week.

Vierling started his week off strong on Tuesday, recording a goal and five assists as the Colts defeated the visiting Sudbury Wolves 7-5. He found the scoresheet again on Friday in Guelph, helping the Colts defeat the Storm 3-2 in overtime. Vierling’s second multi-goal effort of the season came Saturday at home to North Bay as his second of the game was the deciding marker coming 2:34 into the third period. Vierling’s was the game’s first star, finishing with two goals and an assist. He helped the Colts earn a point on Sunday in North Bay, extending his goal-scoring streak to six games with a tally in a 3-2 overtime loss to the Battalion.

A 20-year-old from Aurora, Ont., Vierling leads the Colts with 38 points including 15 goals and 23 assists in 24 games. The former fifth round NHL Draft pick by the New York Rangers in 2020 has recorded 156 points (55-101–156) in 182 career OHL regular season games between Flint and Barrie after being chosen second overall by the Firebirds in the 2018 OHL Priority Selection. Vierling attended training camp with the Columbus Blue Jackets this past September.

Also considered for the award this week, Kitchener Rangers captain Francesco Pinelli scored twice and added six assists in a pair of victories. Windsor Spitfires captain Matthew Maggio was also productive, with a total of six goals on the week including a five-goal effort on Thursday night against the Erie Otters. 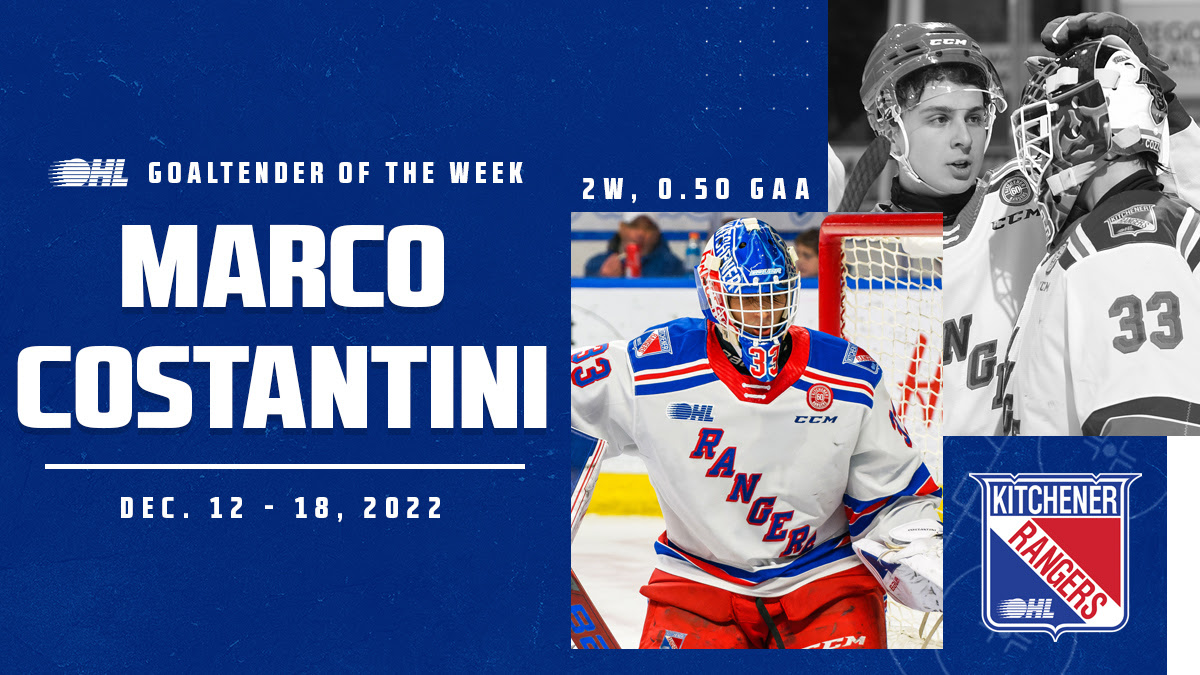 Marco Costantini of the Kitchener Rangers is the OHL Goaltender of the Week, going 2-0 with a shutout, a 0.50 goals-against average and a .981 save percentage as the Rangers enter the holiday break on a six-game winning streak.

Costantini was in the crease for Kitchener’s 9-0 Friday night win over the visiting Soo Greyhounds as he turned aside 22 shots for his second shutout of the season and eighth of his OHL career. He turned aside 30 shots on Sunday afternoon in Mississauga, sending the Rangers into the break with a first star performance in a 5-1 win over the Steelheads.

A 20-year-old from Hamilton, Ont., Costantini owns an overall record of 11-8-0-0 with a 3.16 goals-against average and .902 save percentage in 20 games between Kitchener and Hamilton this season. Last year’s runner-up in OHL Goaltender of the Year voting, Costantini hoisted the J. Ross Robertson Cup as an OHL champion with the Hamilton Bulldogs and owns career regular season totals that include a record of 52-32-8-2 with a 3.15 goals-against average, .898 save percentage and eight shutouts in 99 games. He was 16-2-1-0 in the 2022 OHL Playoffs with a 2.29 goals-against average, .913 save percentage and three shutouts. Originally Hamilton’s fifth round (95th overall) pick in the 2018 OHL Priority Selection, Costantini attended rookie camp with the Toronto Maple Leafs this past September.

Also considered for the award this week, Sarnia Sting netminder Nicholas Surzycia posted a 2.00 goals-against average and .927 save percentage in wins over Erie and Flint.