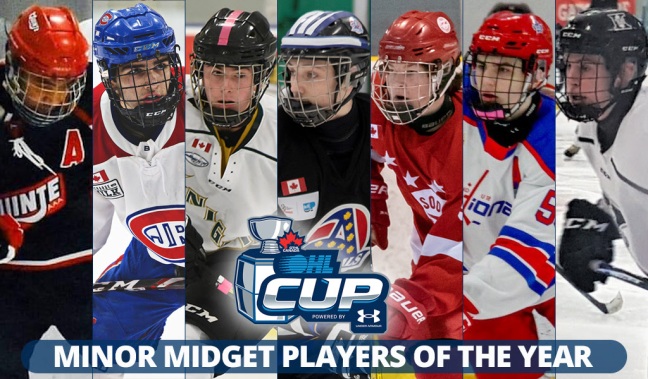 “Congratulations to the recipients of this year’s awards and thank you to the families, coaches, and teammates for their tremendous support of these remarkable players over the course of the season and throughout their minor hockey careers,” said Kyle Pereira, the OHL’s Director of Player Recruitment.

“The OHL continues to recognize all the hard work, dedication, and extraordinary accomplishments from across Ontario. We thank all players for another great season and wish them the very best of luck in their hockey and academic careers.”

On defence, McCoy recorded six goals and 29 assists for 35 points in as many games for the OMHA champion Red Devils while McLeod posted seven goals and 21 assists for 28 points in 39 games with the Kings. Toms registered eight goals and 15 assists, good for 23 points over 36 appearances with the Jr. Greyhounds.

The awards are presented annually to honour the minor midget players who best exemplify outstanding ability and the qualities of sportsmanship and leadership as voted by the minor hockey coaches, managers and organizations of each respective league.