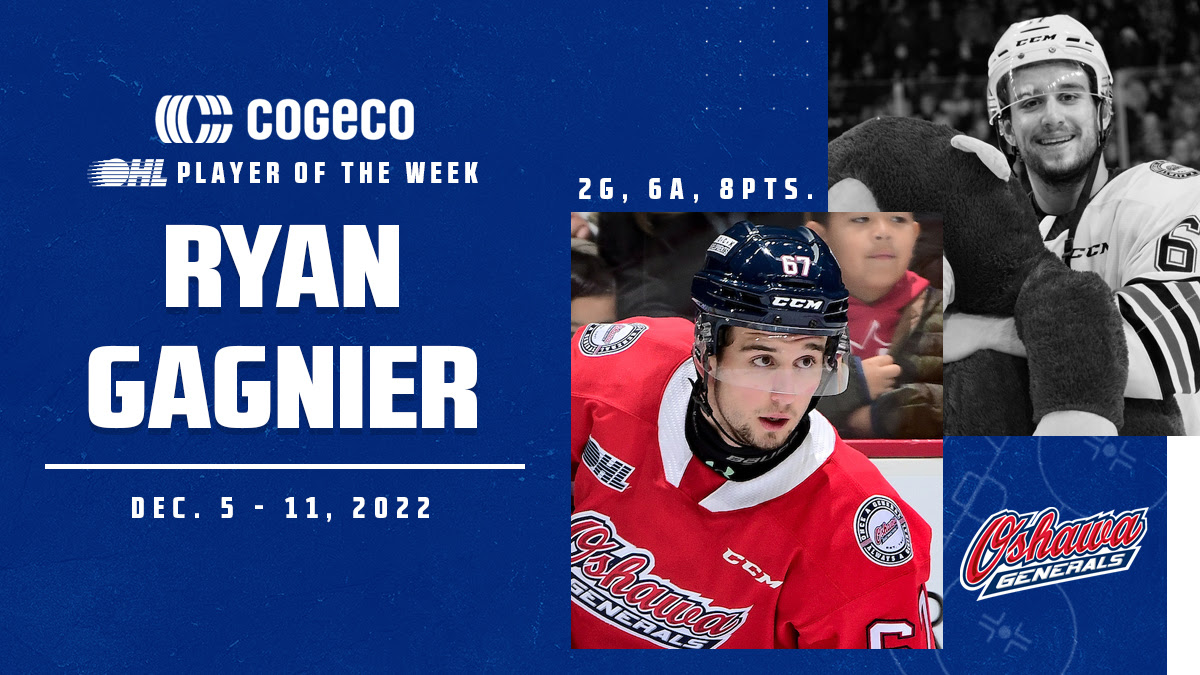 Ryan Gagnier of the Oshawa Generals is the Cogeco OHL Player of the Week, recording two goals, six assists and eight points in three games along with a plus/minus rating of plus-6.

Helping the Generals extend their winning streak to five with three more victories this week, Gagnier got things started with a goal and three assists on Tuesday as Oshawa defeated the London Knights 5-3 at Budweiser Gardens on Tuesday. He picked up an assist on Friday as the Generals defeated the visiting Soo Greyhounds 7-2. Gagnier contributed another goal, two helpers and the shootout winner in Oshawa’s annual Teddy Bear Toss game on Sunday, fueling a 4-3 victory over the Barrie Colts.

A 20-year-old native of Tecumseh, Ont., Gagnier has produced nine goals, 19 assists and 28 points in 29 games this season, winning 57 percent of his 516 faceoff attempts in the process. The former third round (50th overall) pick by the Generals in the 2018 OHL Priority Selection has registered 31 goals, 41 assists and 72 points in 150 career regular season games as he continues his fourth season in Oshawa.

Also given consideration for the award this week were New York Islanders prospect Matthew Maggio of the Windsor Spitfires who recorded four goals and four assists (4-4-8) over three games, along with a plus/minus rating of plus-5. Minnesota Wild prospect Hunter Haight of the Saginaw Spirit was also a standout, registering three goal and five helpers (3-5-8) in four games. 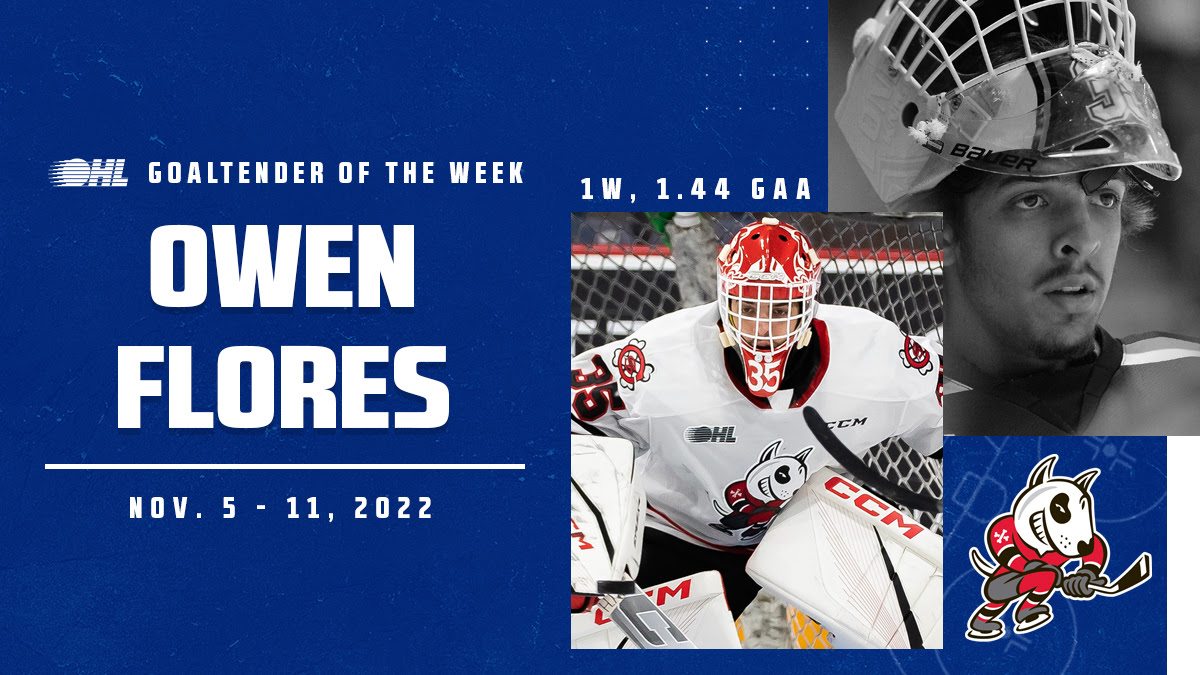 Owen Flores of the Niagara IceDogs is the OHL Goaltender of the Week with one win and a shootout loss, a goals-against average of 1.44 and save percentage of .963.

Flores stopped 77 of the 81 shots that came his way last week, helping the IceDogs earn three of a possible four points. He turned aside 35 shots on top of two of the three shootout attempts he faced on Thursday as the IceDogs fell to the Kingston Frontenacs 3-2. Flores was back between the pipes on Saturday, backstopping the IceDogs to a 2-1 win over the Mississauga Steelheads where he made 43 saves to earn first star honours. 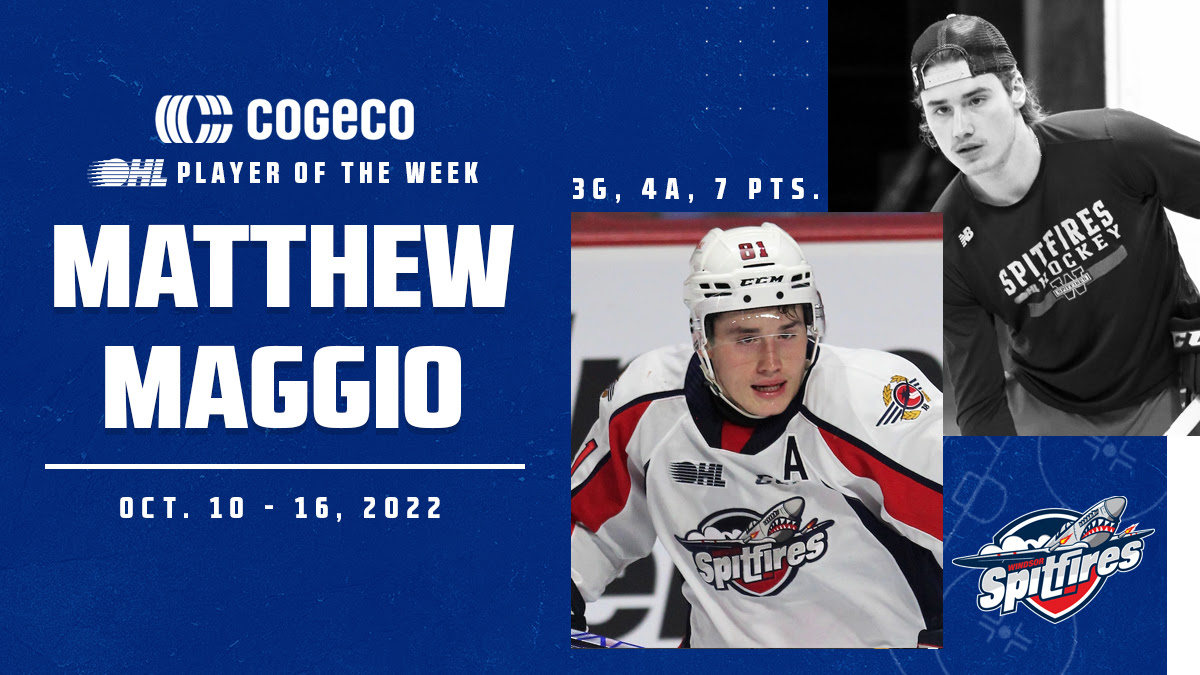 New York Islanders prospect Matthew Maggio of the Windsor Spitfires is the Cogeco OHL Player of the Week, recording three goals, four assists and seven points over three games along with a plus/minus rating of plus-5.

Suiting up at the WFCU Centre for the first time since returning from the New York Islanders, Maggio posted a goal and two assists, setting up Alex Christopoulos’ overtime winner on Thanksgiving Monday as the Spits defeated the Soo Greyhounds 3-2. He proceeded to add two assists in Windsor’s 6-3 road win over the Sarnia Sting on Friday and closed out the weekend with a pair of goals in a 5-4 overtime loss in Owen Sound on Saturday.

A 19-year-old native of Tecumseh, Ont., Maggio has points in all four of his games this season, posting four goals and four assists for eight points. He was a fifth round (142nd overall) pick of the New York Islanders this past summer following 38 goals, 47 assists and 85 points in 66 games last season. Originally selected by the Ottawa 67’s in the fifth round of the 2018 OHL Priority Selection, Maggio is embarking on his fourth OHL season and is one goal shy of 50 on his OHL career. 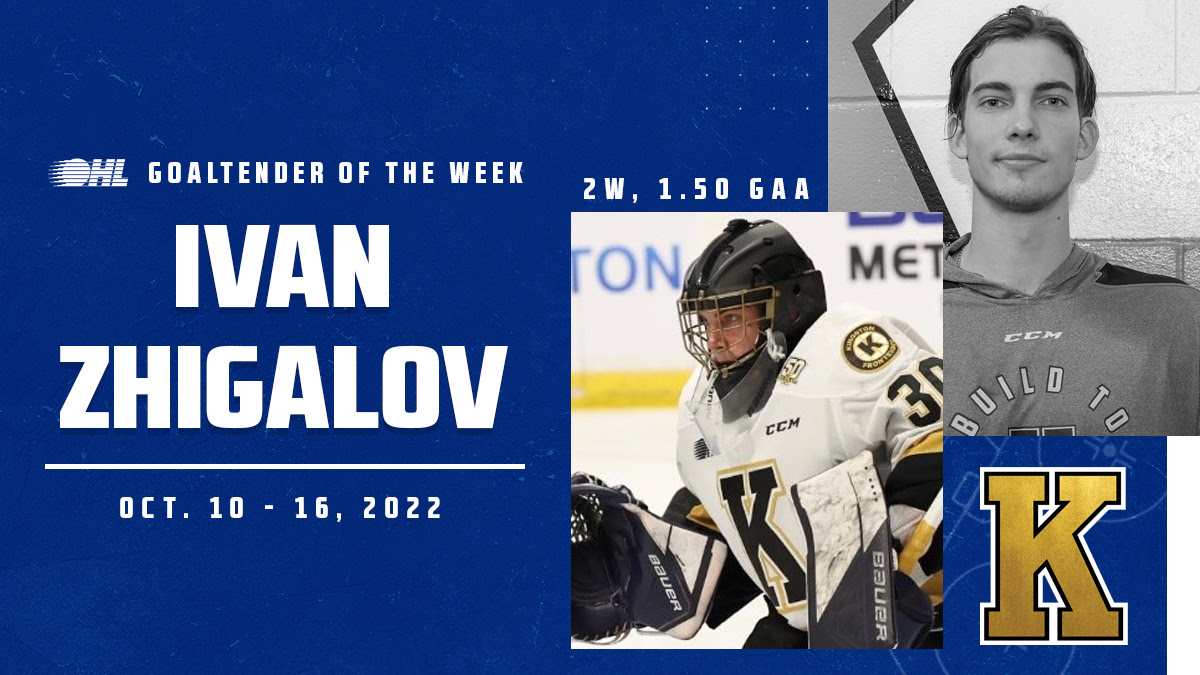 Colorado Avalanche prospect Ivan Zhigalov of the Kingston Frontenacs is the OHL Goaltender of the Week with two victories, a 1.50 goals-against average and a .952 save percentage.

Leading Kingston to an undefeated weekend at home, Zhigalov stopped 29 of the 31 shots that came his way as the Fronts won 4-2 against the Hamilton Bulldogs on Friday. The 6-foot-3, 173Ib. goaltender continued to defend the crease against the Guelph Storm on Saturday, blocking 30 of the 31 shots he faced in a 6-1 win.

A 19-year-old from Minsk, Belarus, Zhigalov owns a 3-1-0-1 record with a 1.78 goals-against average and .945 save percentage in five games this season. The seventh round (225th overall) pick of the Colorado Avalanche this past summer spent the 2021-22 season with the QMJHL’s Sherbrooke Phoenix, playing to a 26-9-3 record with a 2.84 goals-against-average and .892 save percentage. He participated in the 2022 Kubota CHL/NHL Top Prospects Game in Kitchener, Ont., and was Kingston’s first round (47th overall) pick in the 2022 CHL Import Draft. 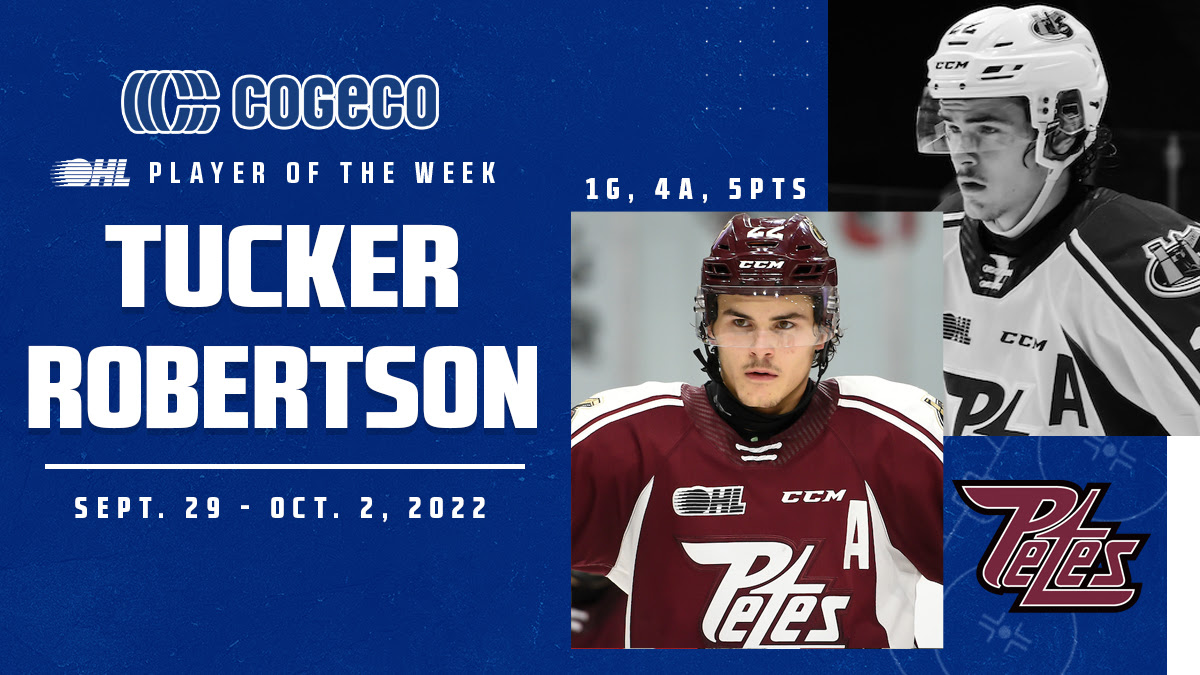 Seattle Kraken prospect Tucker Robertson of the Peterborough Petes is the Cogeco OHL Player of the Week, recording one goal, four assists and five points in a pair of victories.

Robertson got the Petes’ season off to a hot start recording his 50th OHL goal, 100th career point and the shootout game winner in a first star performance as the Petes defeated the Erie Otters 5-4 in their home opener. He followed that up with a three-assist effort on Saturday as the Petes defeated the defending champion Hamilton Bulldogs 5-3 at the Memorial Centre. Robertson excelled in the face-off circle, going a combined 39-for-59 (66%) on the weekend.

Also given consideration for the award this week were Petes teammate and Vancouver Canucks prospect Connor Lockhart, who leads all OHL players with six points (1-5–6) on the young season. Fellow Seattle prospect Ty Nelson of the North Bay Battalion was also a standout, recording five points (1-4–5) in split decisions for the Troops. 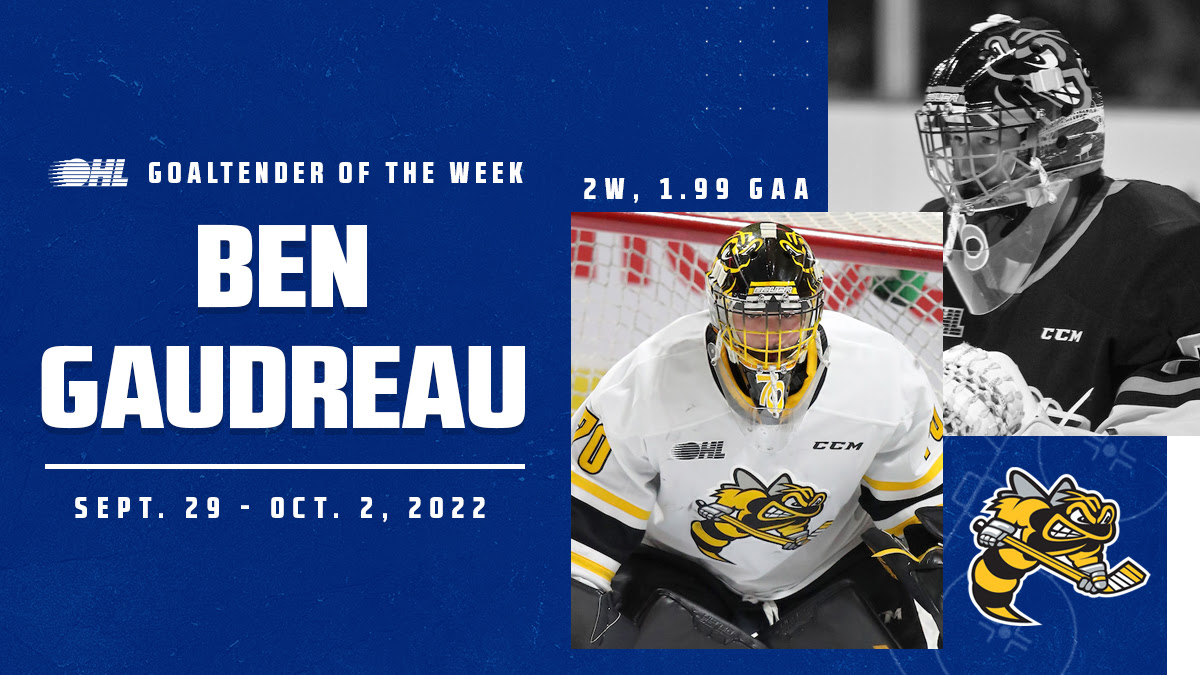 San Jose Sharks prospect Ben Gaudreau of the Sarnia Sting is the OHL Goaltender of the Week with two victories, a 1.99 goals-against average and a .907 save percentage.

Gaudreau was victorious on Friday in Kitchener, stopping 17 of the 20 shots he faced as the Sting defeated the Rangers 6-3. The 6-foot-2, 172Ib. goaltender returned to the crease on Saturday, stopping 22 shots in a 2-1 overtime win over the Windsor Spitfires, picking up second star recognition.

A 19-year-old native of Corbeil, Ont., Gaudreau is embarking on his third season in Sarnia after a strong sophomore season where he went 19-18-4-1 with a 3.71 goals-against average and .891 save percentage over 44 games. Selected in the third round (81st overall) by the San Jose Sharks in the 2021 NHL Draft, Gaudreau was originally Sarnia’s 1st round (7th overall) pick in the 2019 OHL Priority Selection from the North Bay Trappers 16U program. Over parts of three seasons, he’s 31-31-5-2 with a 3.88 goals-against average and .891 save percentage in 74 regular season appearances.

A pair of other candidates were given consideration for the award as Kingston Frontenacs netminder Ivan Zhigalov posted 61 saves in a pair of outings, recording a 2.03 goals-against average and .939 save percentage. Oshawa Generals goaltender Patrick Leaver went 2-0-0-1 on the weekend, posting a 2.92 goals-against average and .910 save percentage.