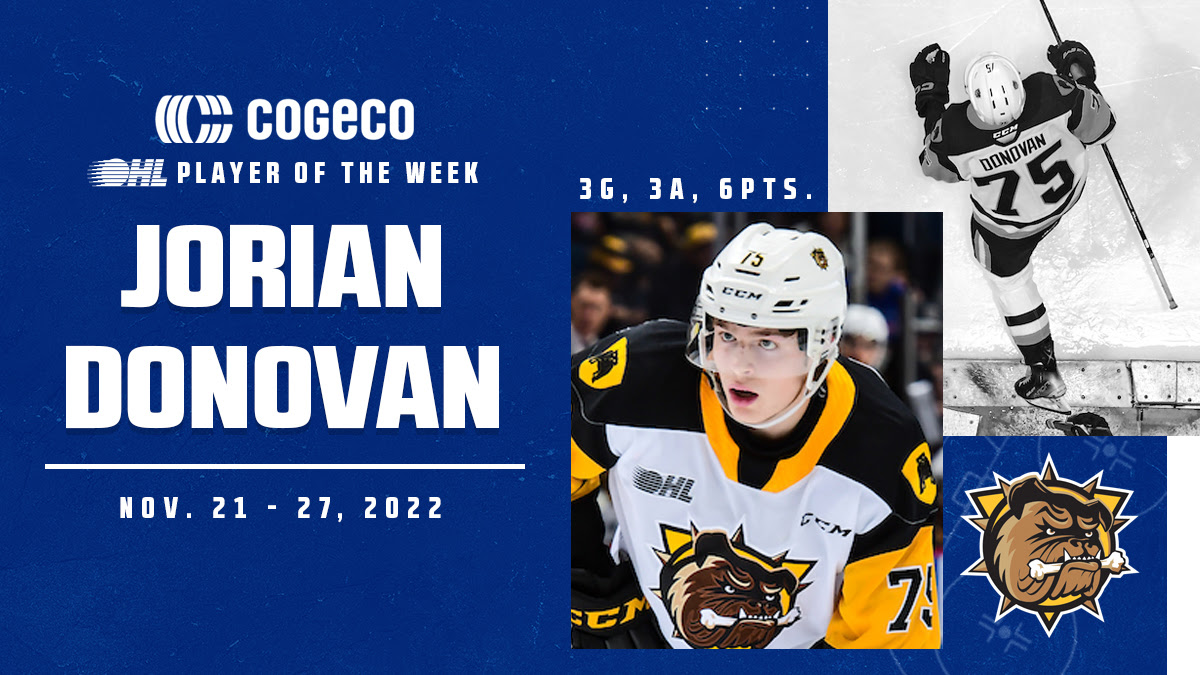 Ottawa Senators prospect Jorian Donovan of the Hamilton Bulldogs is the Cogeco OHL Player of the Week, recording three goals, three assists and six points in two games along with a plus/minus rating of plus-9.

Helping guide the Bulldogs to a perfect 2-0 showing last week, Donovan recorded a pair of assists on Friday as Hamilton overcame the North Bay Battalion 4-1 at home. He registered a career-high four points on Sunday, scoring a hat trick while adding an assist as the Bulldogs defeated the visiting Soo Greyhounds in a high-scoring 10-6 victory. Donovan’s hat trick was just the third by a defenceman in Bulldogs history following prior efforts by Nathan Staios (Feb. 26, 2022 vs. Ottawa) and Ben Gleason (Nov. 24, 2017 at Oshawa).

An 18-year-old native of Richmond, Ont., Donovan leads Hamilton blueliners with 17 points (7-10–17) in 18 games this season, and is riding a current eight-game point streak that dates back to Nov. 10th. He was a fifth round (136rd overall) pick of the Ottawa Senators this past summer following three goals, 19 assists and 22 points in 64 games for the OHL champion Bulldogs. The son of former Ottawa 67’s graduate and long-time NHL forward Shean Donovan, Jorian was originally selected by Hamilton in the first round (6th overall) of the 2020 OHL Priority Selection. 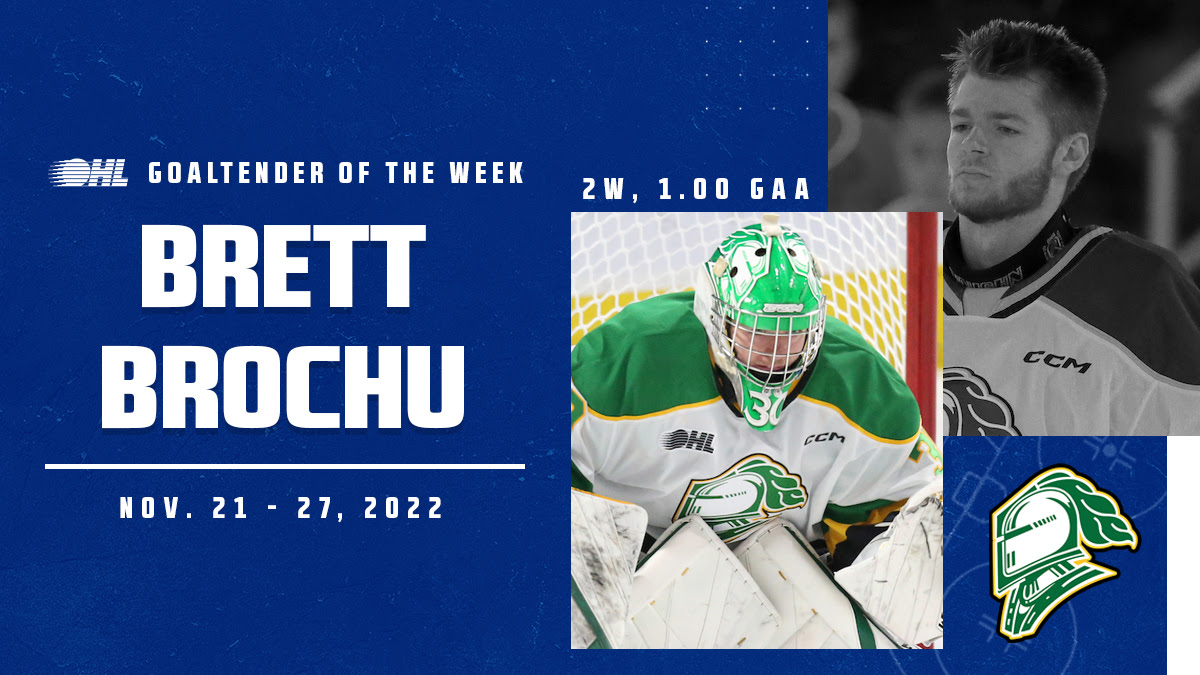 Brett Brochu of the London Knights is the OHL Goaltender of the Week with two victories including a shutout, a 1.00 goals-against average and a .969 save percentage.

Defending the crease in back-to-back wins, Brochu turned aside all 28 shots that came his way to earn first star honours as the Knights opened up the weekend with a 4-0 shutout victory over the Kitchener Rangers on Friday. Brochu returned to the crease on Sunday night in Oshawa, stopping 34 of the 36 shots he faced as the Knights defeated the Generals 4-2. Brochu’s two victories gave him 71 on his OHL career, pushing him ahead of Steve Mason for the fifth-most in franchise history.

A 20-year-old from Belle River, Ont., Brochu owns a 10-6-1-0 record with a 3.07 goals-against average and .892 save percentage in 17 games this season, winning six of his last seven starts. The reigning Jim Rutherford OHL Goaltender of the Year Award recipient owns a 71-23-3-0 record, 2.67 goals-against average, .911 save percentage and five shutouts in 102 regular season contests. Brochu was London’s sixth round (114th overall) pick in the 2018 OHL Priority Selection. He attended training camp with the Vancouver Canucks this past September.

When you search the independent scouting services available, you will find Hamilton Bulldogs defenceman Jorian Donovan ranked anywhere from a late first round pick to the middle of the second round in their 2022 NHL Entry Draft rankings. NHL Central Scouting has him as a B-prospect in their November Players to Watch List – typically meaning a second or third round pick.

Donovan won’t be the top defenceman selected from the OHL at the draft. But the sixth overall pick at the 2020 OHL Priority Selection is certainly going to draw a lot of attention to be the first one chosen “in the next group”.

Donovan is the son of former NHL’er Shean Donovan, who spent 15 seasons in the NHL and played 951 career games.

Donovan is very patient and understands that his first priority is to defend his own zone. He recognizes when his opportunities arise to jump up into the play and how to be the late man coming in the attack. He retrieves pucks in his own zone quickly and is even quicker to transition to offense with a good first pass or to skate it on his own- something he is more than capable of doing.

Donovan is an excellent puck handler and once he reaches top speed is difficult to contain and separate the puck and is excellent at using his body to protect the puck. While he can create space for himself, he has the vision, hockey sense and passing abilities to recognize where the next play is and usually makes the right decision. He has an excellent shot from the point that almost always finds the target and he shoots with a purpose – not always trying to beat the goaltender.

Defensively, his skating helps him with keeping gaps tight and forcing players to the outside. However, there are times you question whether he has made the right decision. That’s not a knock-on Donovan, because you can say that about any defenceman at this level. When you possess the hockey sense and the skating Donovan does, I believe everything else is coachable.

Donovan projects to be a solid two-way, second pairing defenceman at the next level if he reaches his potential.

“This stage of our Summer Showcase is about bringing together the top under-18 players in Canada to work and learn from an elite-level coaching staff, giving them the necessary skills for their hockey development to grow and succeed,” said Alan Millar, director of player personnel for Hockey Canada. “We have an opportunity to connect with the players through on- and off-ice sessions to give them the tools that will only enhance their skill set as they advance through our program and prepare for the upcoming season.”

Letang, who was appointed head coach of the Sting late last month after serving behind the Attack bench, will return to Canada’s coaching staff. Letang won a gold medal as an assistant coach with Canada’s National Junior Team at the 2020 IIHF World Junior Championship and, as a player, helped Canada’s National Men’s Team to a 1998 Spengler Cup championship and won a bronze medal at the 2006 Deutschland Cup.

The camp is typically a stepping stone in evaluating and selecting Canada’s roster for the Hlinka Gretzky Cup, but Canada will not participate this year due to the ongoing COVID-19 pandemic. The focus will now turn to the 2022 IIHF U18 World Championship next spring, where Canada will look to defend their gold medal after claiming the top prize at this year’s tournament in Texas.