Toronto, Ont. – The Ontario Hockey League today announced the recipients of the League’s three Academic Player of the Year awards for the 2021-22 season.

Owen Beck of the Mississauga Steelheads is the winner of the Bobby Smith Trophy as Scholastic Player of the Year presented by CIBC, Adam Varga of the Ottawa 67’s has earned the Roger Neilson Memorial Award as the Top Post-Secondary School Student for a second straight year, and Owen Sound Attack defenceman Cal Uens has been recognized as the Ivan Tennant Memorial Award recipient as OHL’s Top High School Student.

Beck will serve as the OHL’s nomination for the CHL Scholastic Player of the Year Award. 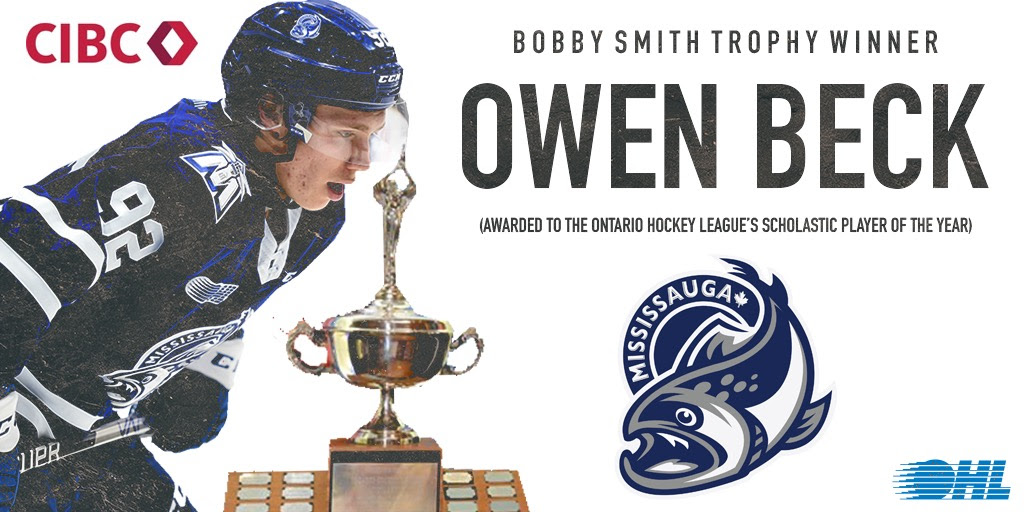 Draft eligible forward Owen Beck of the Mississauga Steelheads is the 2021-22 recipient of the Bobby Smith Trophy awarded to the OHL’s Scholastic Player of the Year presented by CIBC.

Beck is the latest Steelheads player to earn academic recognition from a program that has produced recent Bobby Smith Trophy winners in Thomas Harley (2019) and Nicolas Hague (2016). The 18-year-old centreman has been busy in the classroom, carrying a heavy course load that includes Advanced Functions (96%), University Chemistry (93%), Kinesiology (94%), Calculus (91%) and University Biology (93%), resulting in an overall average of over 93% in his Grade 12 studies at Philip Pocock Catholic Secondary School. On the ice, Beck came in as the 10th ranked North American skater on NHL Central Scouting’s Final Rankings for the 2022 NHL Draft following a rookie season that yielded 21 goals, 30 assists and 51 points in 68 games for the Steelheads.

“Education has always been important to me throughout my hockey career,” said Beck. “Being able to balance two busy activities has given me life skills and characteristics that I will use for the rest of my life. On top of that, as much as every hockey player wants to make a career out of hockey, not everybody always can for reasons beyond the person’s control. I have worked very hard over the past several years to make sure I have put myself in a position where if hockey unfortunately doesn’t work out I have a solid education and many opportunities available to move forward with another career.”

A native of Port Hope, Ont., Beck emerged as one of the OHL’s premier presences in the faceoff circle, winning 60.6% of his draws. He was voted the Eastern Conference’s top face-off man in the OHL Coaches Poll. Following an impressive season that included being named the OHL’s Rookie of the Month in November, Beck helped the Steelheads reach the second round of the OHL Playoffs, recording six points (1-5–6) in 10 games. He was Mississauga’s second round (29th overall) pick in the 2020 OHL Priority Selection.

“The Mississauga Steelheads would like to congratulate Owen Beck for being named this year’s Bobby Smith Trophy recipient,” said Steelheads Head Coach and General Manager James Richmond. “The entire organization is so proud of Owen for everything we all see every game on the ice but even more so for what he does in the classroom. This is a huge accomplishment! Owen’s commitment and dedication both in the classroom and on the ice is exceptional and he’s a very deserving recipient of this prestigious award.”

Next in line for the award were a pair of other draft eligibles in forward Matthew Poitras of the Guelph Storm and top-ranked prospect Shane Wright of the Kingston Frontenacs. 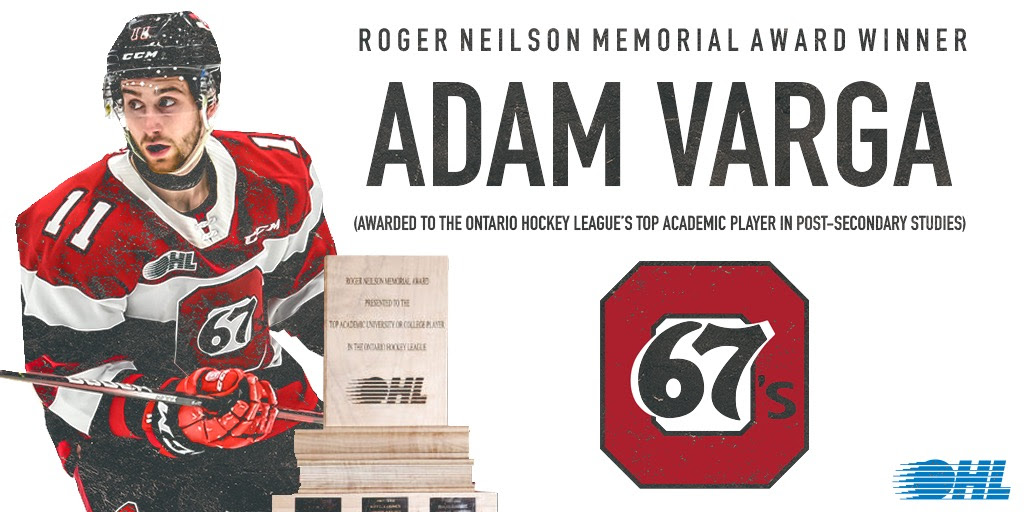 “I am honoured to receive the Roger Neilson Memorial Award for the second time,” said Varga. “At a young age, my family instilled in me the importance of continuing my education. The OHL has allowed me to do just that. I would not be able to achieve this honour without the resources provided to me by the Ottawa 67’s organization. I want to thank the Ottawa Sports and Entertainment Group, James Boyd, Jan Egert, and Eileen Duffin for the remarkable support they have given me to succeed. Coach Dave Cameron has also had a tremendous influence on me. From day one, he preached the importance of hard work and dedication. Not just on the ice but in everything I do.”

A 20-year-old native of Bel Air, Maryland, Varga recorded four goals, 11 assists and 15 points in 40 games with the 67’s in his overage season. The 6-foot-1, 181Ib. right-winger appeared in 205 career regular season contests between Ottawa and Mississauga, recording 18 goals, 30 assists and 48 points in the process. He was originally Mississauga’s seventh round (121st overall) pick in the 2017 OHL Priority Selection.

“Adam’s strong leadership skills are evident both on the ice and in his approach to academics,” said 67’s General Manager James Boyd. “He has once again proven to be a diligent student athlete with excellent time management skills. What stands out most during his time with the 67’s is Adam’s relentless work ethic and perseverance towards every task that he dedicates his time to. We congratulate Adam and are all excited to follow and support him in the next phase of his career.”

The Roger Neilson Memorial Award is named in honour of the Hall of Fame Coach who served behind the Peterborough Petes bench in the late 1960’s and early 1970’s.  Neilson, a former high school teacher, was a pioneer in stressing the importance of education to all of his players. Varga is the third different 67’s player to receive the honour following back-to-back recipient Danny Battochio (2005, 2006) while joining Sasha Chmelevski (2019) as the second American-born player to have his name engraved on the trophy.

Finalists for the Roger Neilson Memorial Award include defencemen Luc Brzustowski of the Soo Greyhounds and Ryan Mast of the Sarnia Sting. 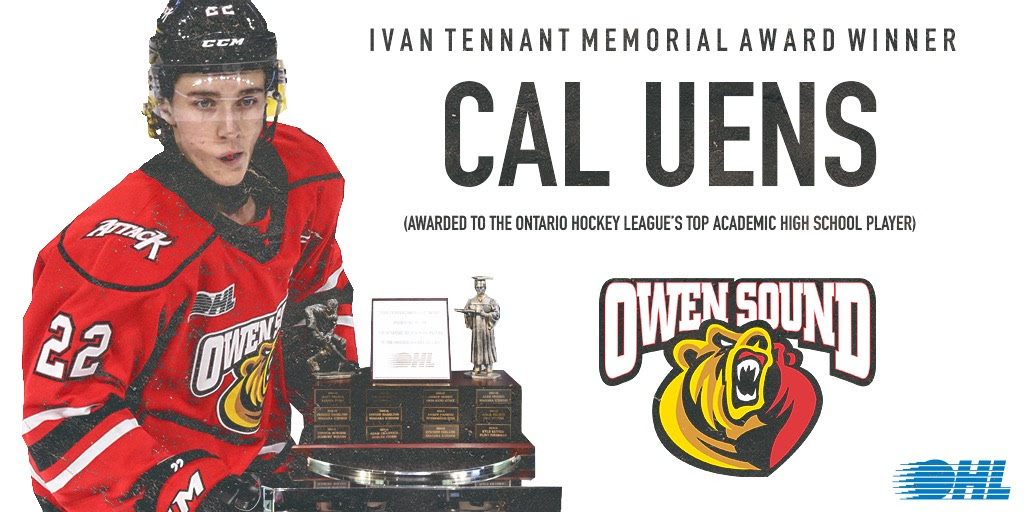 Uens achieved a 98.7% average in studies at Owen Sound District Secondary School, excelling in Business Leadership (100%), a pair of English courses (98%, 99%) and Challenge and Change in Society (98%). His impressive work ethic has resulted in him accumulating enough credits to graduate Grade 12 a year early, enabling him to begin taking University courses next season.

“It’s an honour to win the Ivan Tennant Memorial Award,” said Uens. “I would like to thank academic advisor Sarah Rowe and the Attack organization for giving me the best opportunities to be successful both on and off the ice.”

A 17-year-old native of Napanee, Ont., Uens recorded four goals, 14 assists and 18 points over 68 games in his rookie season on the Attack blue line. The 5-foot-8, 152Ib. defender was Owen Sound’s third round (42nd overall) choice in the 2021 OHL Priority Selection. He will be eligible for the NHL Draft in 2023.

“The Attack organization would like to congratulate Cal Uens on being named the recipient of this year‘s Ivan Tennant Memorial Award,” said Attack General Manager Dale DeGray. “Cal has been an incredibly dedicated individual both on and off the ice. Contributing in all 68 games this season and at the same time will finish with enough credits to graduate Grade 12 a year early. This in itself without the added commitment of playing in the OHL would be a tremendous feat. It is great to see that Cal’s drive in the classroom has been rewarded.”

The Ivan Tennant Memorial Award is given to the League’s Top Academic High School Player and is named in honour of Ivan Tennant, who spent a lifetime combining hockey and education. He was the Kitchener Rangers’ Education Consultant for 20 years and a key figure on the OHL’s Education Consultant’s Committee. Uens follows other recent Attack recipients in Logan LeSage (2020) and Mack Guzda (2018 & ’19). Hamilton Bulldogs forward Lawson Sherk claimed the award in 2021.

Finalists for the award included rookies Sam Alfano of the Peterborough Petes and Matthew Poitras of the Guelph Storm.