There is no debating this choice. Barlow went on a tear in the month of January and scored 14 goals and 6 assists in just 12 games to take the honors here and now leads the draft class in goals and points. Actually, he leads the league in goals. You’ll also find him among the leaders in assists and plus/minus.

Barlow had just one game where he didn’t register a goal or a point and that came on January 20 on the road against the London Knights. He had three multi-goal games and 7 multi-point games. For his efforts, the OHL named him Player of the Month for January.

Also considered was Zander Veccia of the Mississauga Steelheads. Veccia appeared in 11 games in January, scoring 7 goals and adding 9 assists. Just how productive was Veccia? Over half his production of 13 goals and 15 assists on the season came in January.

If anyone benefited from a trade near trade deadline, it’s Dionicio. He appeared in 11 games for the Spitfires in January and scored twice and assisted on 11 to lead all draft eligible blueliners. He had 4 goals and 3 assists in 17 games prior to the deal. He had two games with 3 helpers. One coming against the Saginaw Spirit on January 12 and the other against the London Knights on January 15.

Also considered was Beau Akey of the Barrie Colts. He appeared in 11 games during the month and scored once and assisted on 9 others. He has 7 goals and 29 assists on the season to lead draft eligible defencemen.

It was quite the month for Oster after a trade from the Guelph Storm. He appeared in 4 games, going 3-1-0 with a hefty .965 save-percentage and back-to-back shutouts where he stopped 19 of 19 shots he faced against the Kingston Frontenacs and then stopping all 30 he faced against the North Bay Battalion two nights later. Even in his only loss he stopped 35 of 38 shots. He was named Goaltender of the Month by the OHL for the week of January 23-29.

Also considered was Zach Bowen of the London Knights who went 3-0-0 and stopped 80 of 84 shots with one shutout and a save-percentage of .952.

Our previous choices were: 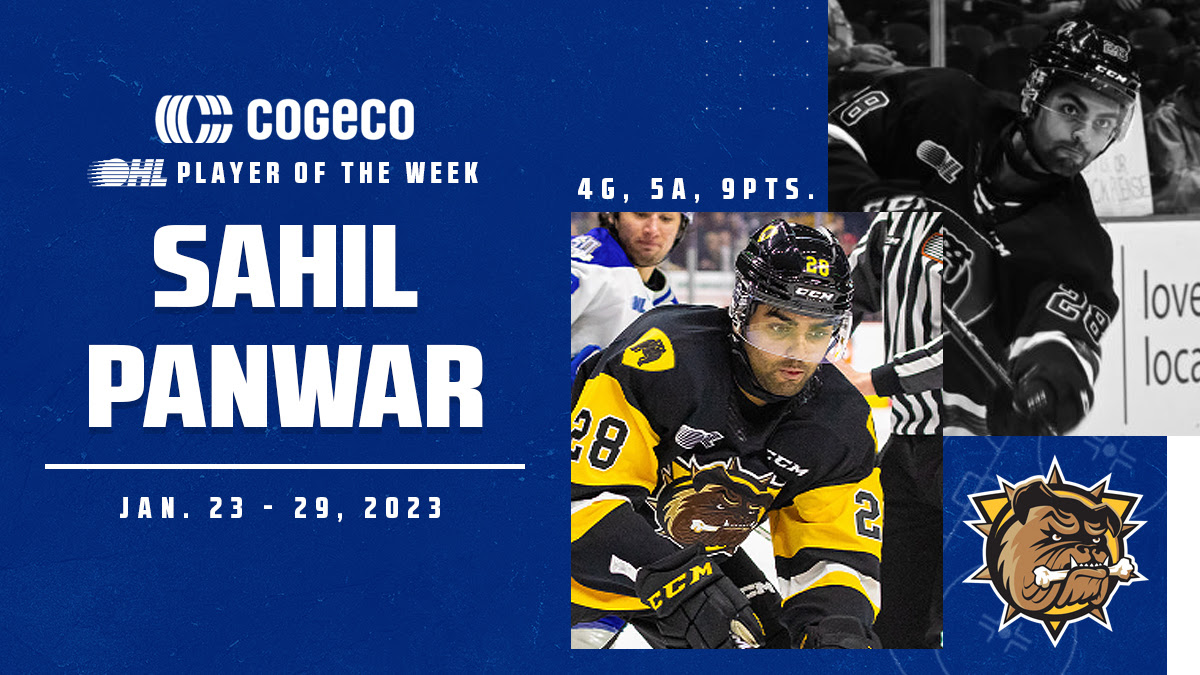 Sahil Panwar of the Hamilton Bulldogs is the Cogeco OHL Player of the Week, recording four goals, five assists and nine points in three games along with a plus/minus rating of plus-3.

After getting his week started with an assist in a 5-1 Thursday night loss to the Flint Firebirds, Panwar returned to the scoresheet on Saturday, picking up a pair of goals and an assist in a 5-4 overtime win over the league-leading Ottawa 67’s. Panwar earned his second straight first star honour on Sunday, recording a career-high five points including two goals and three helpers (2-3–5) as the Bulldogs defeated his former club, the Peterborough Petes, by a score of 7-4.

A 21-year-old native of Mississauga, Ont., Panwar has produced 15 goals, 20 assists and 35 points in 45 games between Hamilton and Peterborough this season. The 6-foot, 185Ib. centre has 18 points (5-13–18) in 11 games since joining Hamilton on January 7th. The former second round (23rd overall) pick by the London Knights in the 2018 OHL Priority Selection has registered 38 goals, 52 assists and 90 points in 176 career regular season games split between the Knights, Flint Firebirds, Peterborough Petes and Hamilton Bulldogs. Panwar attended rookie camp with the Florida Panthers as a free agent invite in September.

Also given consideration for the award this week were Los Angeles Kings prospect Brandt Clarke of the Barrie Colts who scored his first career OHL hat trick as part of a six goal, two assist and eight point performance in three games last week. Boston Bruins prospect Matthew Poitras of the Guelph Storm was also a standout, recording two goals and four assists (2-4–6) including an overtime winner over two games. 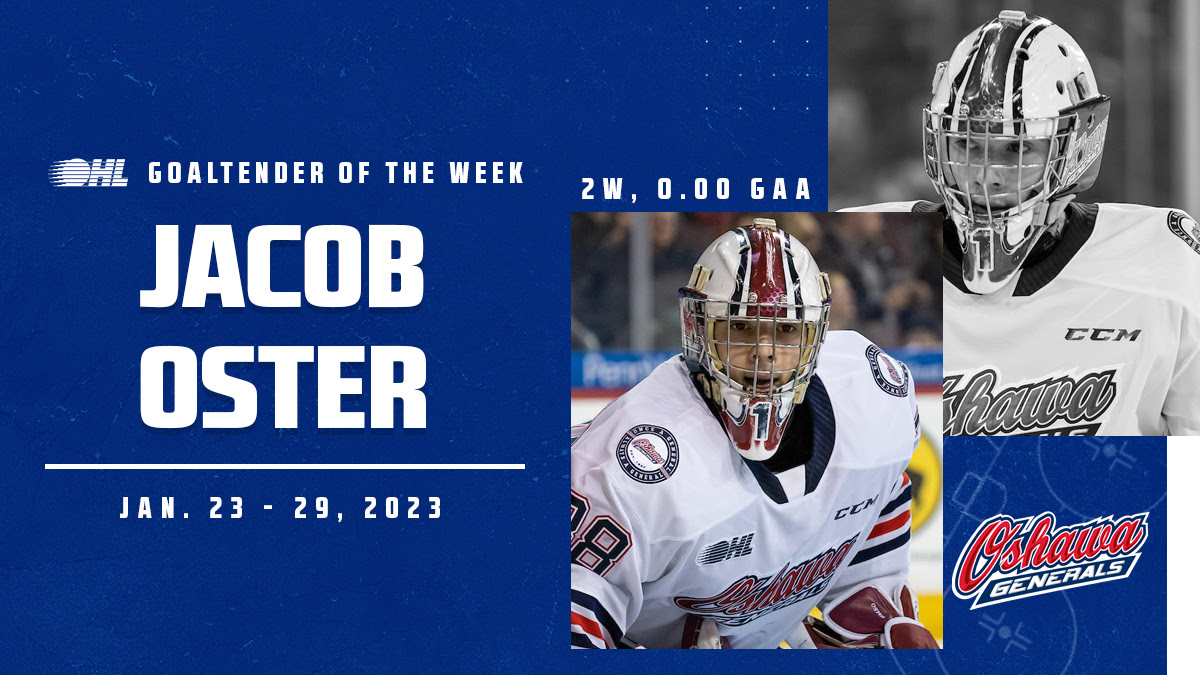 Jacob Oster of the Oshawa Generals is the OHL Goaltender of the Week with back-to-back shutouts, stopping all 49 shots that came his way in victories over Kingston and North Bay.

Oster’s first career OHL shutout came Friday in Kingston as he stopped all 19 shots he faced while Calum Ritchie scored twice in a 2-0 road win over the Frontenacs. He continued his run of perfection on Sunday, making 30 saves for second star recognition as the Generals blanked the Central Division-leading North Bay Battalion 4-0 on home ice. Oster has now played nearly 140 consecutive minutes of shutout hockey dating back to January 19th.

McTavish found the back of the net in all four outings, recording a goal and an assist in his return to the Peterborough Memorial Centre on Tuesday as the Bulldogs took a 6-2 decision. He scored the third period game winner in a 3-2 triumph over the Oshawa Generals on Thursday, and tacked on an additional goal and assist a night later in Erie as Hamilton prevailed by a score of 3-0. McTavish wrapped things up with a goal and assist in Sunday’s 6-1 win over visiting Peterborough, finalizing a productive week that saw Hamilton clinch its second East Division banner.

A 19-year-old native of Carp, Ont., McTavish has registered 40 points (18-22–40) in 25 games between Hamilton and Peterborough this season, collecting 33 of those (12-21–33) since joining the Bulldogs. The 6-foot-1, 207Ib. centre recorded two goals and an assist in nine games with the Anaheim Ducks earlier this season, also appearing in three games with the AHL’s San Diego Gulls where he posted a goal and assist. Voted to the OHL’s second all-rookie team in 2019-20 before winning World Under-18 gold with Team Canada in 2021, McTavish was selected by Anaheim with the third overall pick of the 2021 NHL Draft. The Peterborough Petes selected him with the fifth overall pick of the 2019 OHL Priority Selection from the Pembroke Lumber Kings U18 program.

Also considered for the award this week, reigning OHL Player of the Month and current scoring leader Wyatt Johnston of the Windsor Spitfires recorded seven points (2-5–7) in three wins, while Guelph’s Cooper Walker had six points (4-2–6) over three outings as the Storm went 3-0.

Patrick Leaver of the Oshawa Generals is the OHL Goaltender of the Week, going 2-0-0-1 with a 2.52 goals-against average and .933 save percentage as the Generals collected five of a possible six points and clinched a spot in the OHL Playoffs.

Leaver was kept busy, making 111 saves in three outings beginning with 30 in a 4-3 shootout loss to the Ottawa 67’s on Tuesday that netted him first star honours. He was first star again on Friday in Kingston, turning aside 40 of 43 before stopping three of four in a shootout as the Generals won 4-3. Leaver saved the best for last, making 41 saves in Sunday’s 3-2 overtime win over the visiting Frontenacs, backstopping the Generals to two points despite being outshot 43-22. He joins Barrie’s Mack Guzda as the second netminder to earn Goaltender of the Week honours three times this season.

An 18-year-old from Perth, Ont., Leaver has played to a mark of 22-17-1-3 this season with a 3.16 goals-against average and .909 save percentage to go with two shutouts. The 6-foot-1, 186Ib. The former eighth round (158th overall) pick in the 2019 OHL Priority Selection was the 29th-ranked North American goaltender on NHL Central Scouting’s Midterm Rankings released in January.

Also considered for the award this week, Jacob Oster of the Guelph Storm picked up a pair of wins including a 43-save effort in Flint on Saturday as the Storm booked a trip to the OHL Playoffs. Hamilton Bulldogs goaltender Matteo Drobac earned his first career OHL shutout, going 2-0 with a 0.86 goals-against average and .957 save percentage as the Bulldogs clinched an East Division title.

Calgary Flames prospect Rory Kerins of the Soo Greyhounds is the OHL Player of the Week with a league-leading 10 points including five goals and five assists over three games including a plus/minus rating of plus-3.

Kerins got the week started with a four-point performance on Wednesday night as the Greyhounds defeated the visiting Sudbury Wolves 4-3 in overtime. Kerins scored twice, tying the game with a third period power play marker before collecting an assist on Tye Kartye’s game winner. His dominance carried over into Friday’s home date against the North Bay Battalion as Kerins posted a career-high six points including his first OHL hat-trick as the Hounds outgunned the Troops 8-5. Kerins’ six points were the most by a Greyhounds player in a single game since Nick Cousins recorded six on Feb. 16, 2013 against the Kingston Frontenacs. Kerins was held off the scoresheet on Saturday as the Hounds fell to the Battalion 4-2 on home ice. The 5-foot-11, 186Ib. centreman was an impressive 68 percent in the faceoff circle last week, winning 51 of his 75 draws.

A 19-year-old from Caledon, Ont., Kerins is currently tied for the OHL lead in scoring with his 14 points (8-6–14) over eight games. His 61.8 percent success rate in the faceoff circle is third among centremen with at least 100 faceoff attempts this season. Kerins was a sixth round (174th overall) pick by the Calgary Flames in the 2020 NHL Draft and made his pro debut with the organization last season, appearing in four games with the AHL’s Stockton Heat. The Greyhounds selected him with their fourth round (71st overall) pick in the 2018 OHL Priority Selection from the Mississauga Rebels U16 program.

Kerins becomes the first Greyhounds player to earn the weekly honour since Morgan Frost last did so from Jan. 14-20, 2019.

Also considered for the award this week were San Jose Sharks prospect Danil Gushchin of the Niagara IceDogs who finished the week with nine points including five goals and four assists over three contests. Gushchin’s first career OHL hat-trick headlined an IceDogs win over the Barrie Colts on Thursday. Kerins’ Soo Greyhounds teammate Tye Kartye was also in the running after recording eight points including four goals and four assists over three games last week.

Guelph Storm rookie Jacob Oster is the OHL Goaltender of the Week with a pair of wins, a 1.50 goals-against average and a .942 save percentage.

Oster stopped 49 of the 52 shots he faced over the weekend, first denying 35 of 36 in a 2-1 Storm road win over the Sarnia Sting on Friday. He was back in the crease on Sunday afternoon at home to the Kitchener Rangers, earning first star honours with 14 saves in a 4-2 victory.