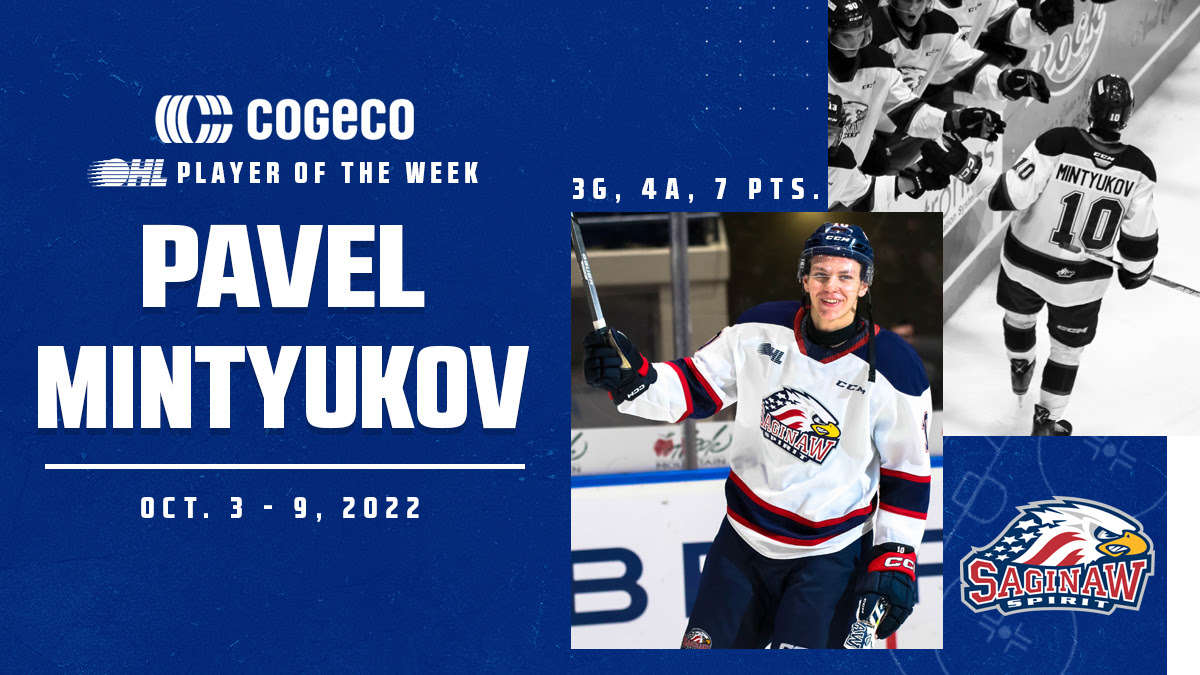 Anaheim Ducks prospect Pavel Mintyukov of the Saginaw Spirit is the Cogeco OHL Player of the Week, recording four goals along with three assists for seven points over three games.

Mintyukov led the Spirit, recording one goal and one assist in a 7-4 win against the Sarnia Sting on Friday, continuing his efforts in a two-point night on Saturday against the Windsor Spitfires. The six-foot-three, 195 lb. blueliner closed out the weekend with two goals and an assist on Sunday to help Saginaw defeat the Sudbury Wolves 5-2 at home as he now leads all OHL players with 12 points (5-7-12) on the season.

An 18-year-old rearguard, Mintyukov was selected in the first round (10th overall) by the Anaheim Ducks in the 2022 NHL Draft. The former first round (52nd overall) pick by the Spirit in the 2020 CHL Import Draft recorded 17 goals, 45 assists and 62 points last season, becoming the first defenceman to ever lead the Spirit in regular season scoring. 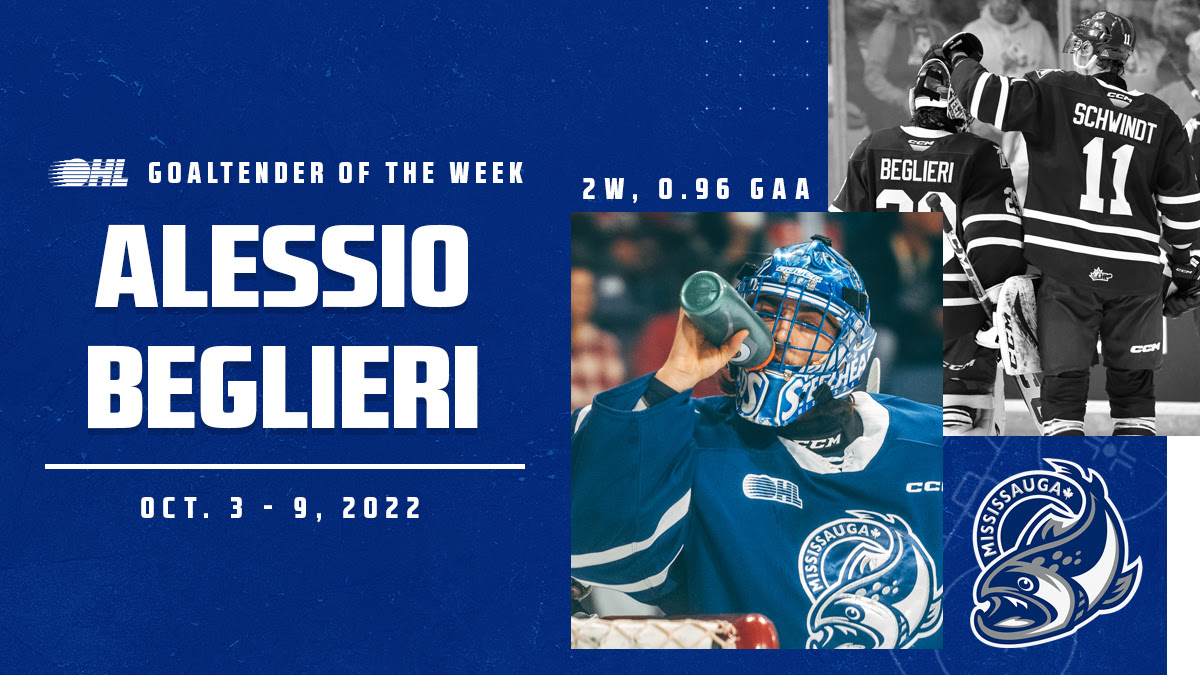 Alessio Beglieri of the Mississauga Steelheads is the OHL Goaltender of the Week with two victories, a 0.96 goals-against average, .961 save percentage and one shutout.

Beglieri stopped 35 of the 37 shots that came his way on top of two shootout attempts as the Steelheads won 3-2 over the Erie Otters despite being outshot 37-26 on Friday. The 5-foot-11, 170Ib. goaltender returned to the crease on Saturday, stopping 14 shots for his first career OHL shutout in a 4-0 triumph over the Owen Sound Attack.

An 18-year-old from Nidau, Switzerland, Beglieri was selected by the Steelheads in the first round (33rd overall) of the 2022 CHL Import Draft and remains undefeated in three appearances for Mississauga this season.

A pair of other candidates were given consideration for the award as North Bay Battalion netminder and Winnipeg Jets prospect Dom DiVincentiis posted 47 saves in a pair of outings, recording a 1.44 goals-against average and .940 save percentage. Peterborough Petes goaltender Michael Simpson blocked 26 shots for the shutout on Saturday, posting a 1.52 goals-against average and .949 save percentage in two appearances.

I will admit that when NHL Central Scouting released it’s mid-term rankings, I was all giddy that they had Saginaw Spirit Centreman Matyas Sapovaliv ranked fourth among Ontario Hockey League prospects eligible for the 2022 NHL Entry Draft. I was equally giddy when Sapovaliv appeared third among OHL players On Bob McKenzie’s mid-term list.

I will be the first to admit that Sapovaliv was not originally on my top-10. Having watched him at the Under-18 and some Under-17, I felt his skating was going to hold him back some. Well, credit to Sapovaliv as he put in the necessary work to improve both his mobility, agility and speed. There is more work to be done, but I am told he is putting in the extra effort and it will pay dividends.

Through Saginaw’s first 32 games this season, Sapovaliv has 10 goals and 16 assists which places him second among Spirit skaters. In the league he is fifth among rookies and just 5 points off the lead with games in hand on everyone ahead of him. His 10 goals come on 76 shots for a 13.2 shooting percentage. He is especially deadly on the powerplay where 6 of his 10 goals have come and easily leads his team in that department. He also leads his team in faceoff attempts (528), faceoff wins (271) and faceoff percentage (51.3%).

At 6’3” Sapovaliv has great size. While he uses that size, along with his reach effectively in different situations – protecting the puck and breaking up plays – I would like to see him use it to his advantage to win more battles and to drive to the net more often. He’s not soft by any means, but he could certainly use it to his advantage to dominate more at this level.

Sapovaliv is a shooter and a play maker. While I am impressed with his shot accuracy, ability to get it off quickly and that it has some mustard behind it, I am more impressed with his playmaking abilities. He sees the ice very well, has superb anticipation, and can thread the needle with a pass. He can slow the pace down and wait for the play to develop or allow his teammates to get into areas and then send a tape-to-tape pass. At the next level, I think his playmaking skills will translate better.

I am also impressed with Sapovaliv’s defensive game. He uses that long reach of his to break up plays, but he is also very adept at coming back into the slot and winning that vast majority of his battles there. As a center, he knows his role of coming back to help the defenders and he puts in the effort.

There is still half a season to go in the OHL. Sapovaliv just needs to keep on improving.