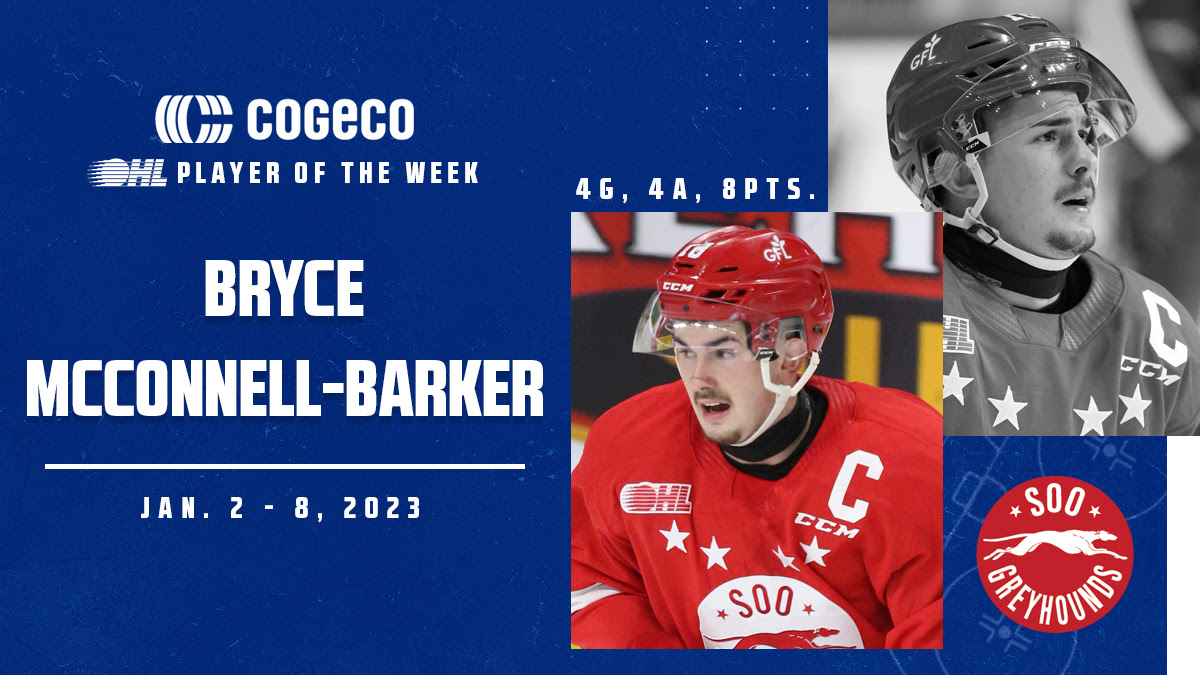 New York Rangers prospect Bryce McConnell-Barker of the Soo Greyhounds is the Cogeco OHL Player of the Week, recording four goals, four assists and eight points in three games along with a plus/minus rating of plus-4.

McConnell-Barker started his week off strong on Wednesday, recording two goals including the game-winner as the Greyhounds defeated the visiting Kitchener Rangers 5-4. He found the scoresheet again on Friday in Flint, recording a goal an an assist as the Greyhounds fell short to the Firebirds 6-5 in overtime. McConnell-Barker helped the Greyhounds bounce back at home on Sunday as the forward earned first star honours, finishing with a goal and three helpers in a 6-3 victory over the London Knights to close out the weekend.

An 18-year-old native of London, Ont., McConnell-Barker leads the Greyhounds with 47 points (21-26–47) in 37 games this season. He was a third round (97th overall) pick of the New York Rangers this past summer following 23 goals, 26 assists and 49 points in 68 games as a rookie with the Greyhounds last season. The 6-foot-2, 196lb. forward was originally Sault Ste. Marie’s first round (4th overall) pick in the 2020 OHL Priority Selection from the London Jr. Knights U16 program.

Also given consideration for the award this week were Anaheim Ducks prospect Sasha Pastujov of the Sarnia Sting, who recorded two goals and four assists in a pair of victories. Overage forward James Hardie of the Mississauga Steelheads was also a standout, recording two goals and four helpers (2-4-6) over three games, pulling into a tie for the most goals (114) and points (207) in Mississauga Steelheads franchise history. 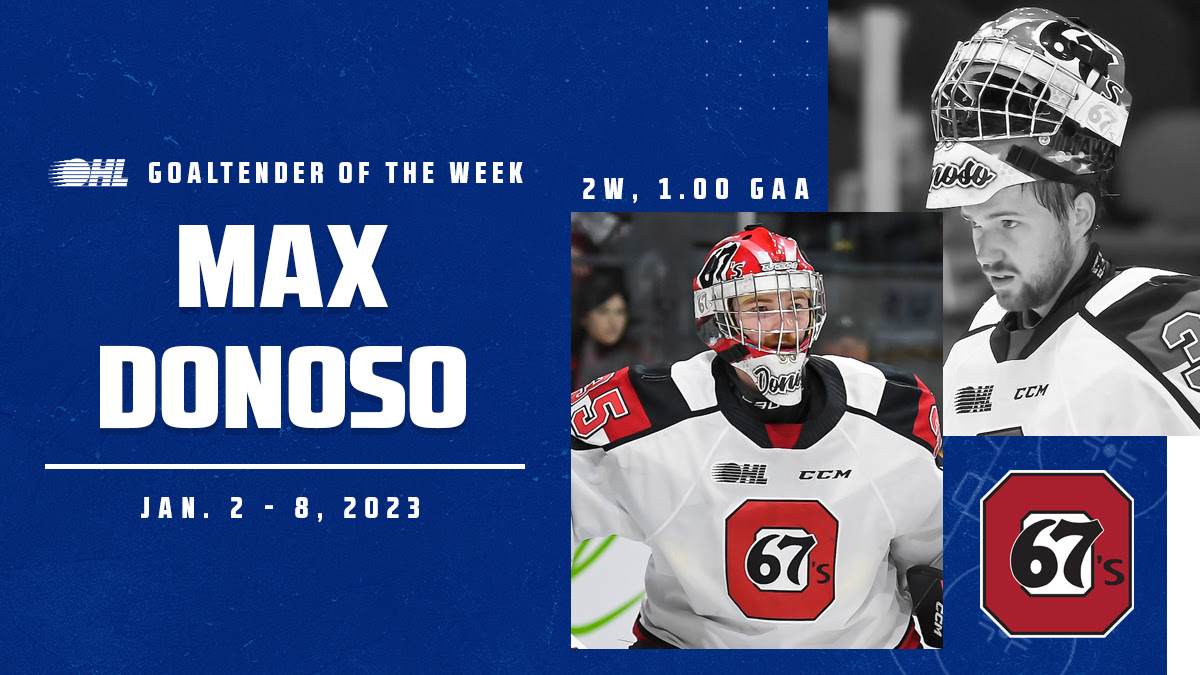 Max Donoso of the Ottawa 67’s is the OHL Goaltender of the Week, posting a 2-0 record with a 1.00 goals-against average and .951 save percentage.

Defending the crease in back-to-back victories, Donoso turned aside 26 of the 27 shots that came his way on Friday as Ottawa defeated the Niagara IceDogs 4-1. The 6-foot-1, 182lb. netminder returned to the crease on Sunday, stopping 13 of the 14 shots he faced as the 67’s closed out the weekend with a 5-1 win over the Owen Sound Attack.

A 19-year-old from Windsor, Ont., Donoso owns a 19-5-0-1 record with a 2.62 goals-against average and .901 save percentage in 27 games this year. Donoso ranks third among OHL goaltenders in goals-against average this season as the 67’s remain atop the OHL standings. The former fifth round (98th overall) pick by the 67’s in the 2019 OHL Priority Selection currently holds a 30-14-1-6 record in 54 regular season OHL appearances.

A pair of other candidates were given consideration for the award as Guelph Storm netminder Brayden Gillespie went 2-0-0-1 with a 2.65 goals-against average and .910 save percentage, helping the Storm collect five of a possible six points. Sarnia Sting goaltender Nicholas Surzycia went 2-0 on the weekend, recording a 1.50 goals-against average and .942 save percentage. 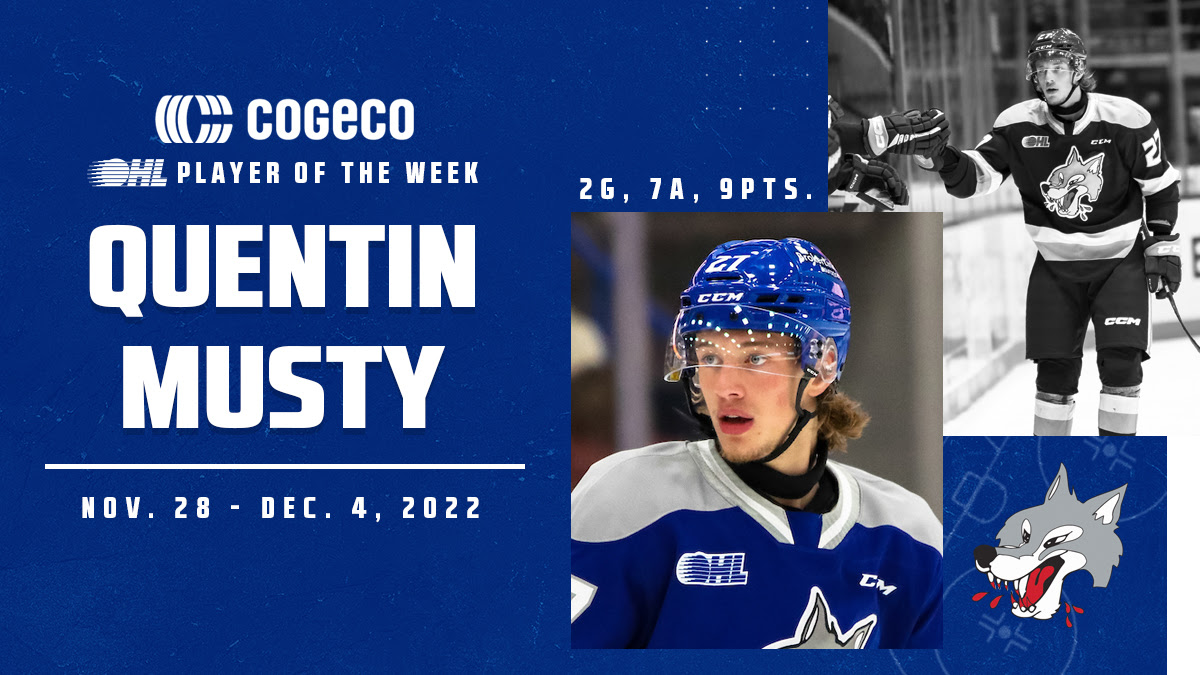 2023 NHL Draft prospect Quentin Musty of the Sudbury Wolves is the Cogeco OHL Player of the Week, recording two goals, seven assists and nine points in two games along with a plus/minus rating of plus-4.

Musty returned to the Wolves lineup with a goal and an assist in Friday’s 3-2 loss to the visiting Owen Sound Attack. He took centre stage on Sunday afternoon, extending his point streak to 12 games with a franchise record-tying seven points (1-6–7) in a lopsided 13-2 win over the visiting Niagara IceDogs. Musty’s seven points are the most in a single game by a Wolves player since Mike Fisher and Norm Milley both posted seven on Dec. 18, 1998 against Barrie. Hector Marini (Oct. 8, 1976 vs. Ottawa) and Ron Duguay (Mar. 13, 1977 at Toronto) also share the record with Musty, who helped the Wolves score the most goals by an OHL club since the Guelph Storm netted 13 on Mar. 14, 2014.

A 17-year-old from Hamburg, NY., Musty leads the Wolves with 34 points (9-25–34) in 22 games this season. Selected first overall by Sudbury in the 2021 OHL Priority Selection from the North Jersey Avalanche U16 program, the 6-foot-2, 197Ib. Musty recorded 12 goals, 19 assists and 31 points in his rookie campaign last season. He was recently upgraded to an ‘A’ rating by NHL Central Scouting for the 2023 NHL Draft. 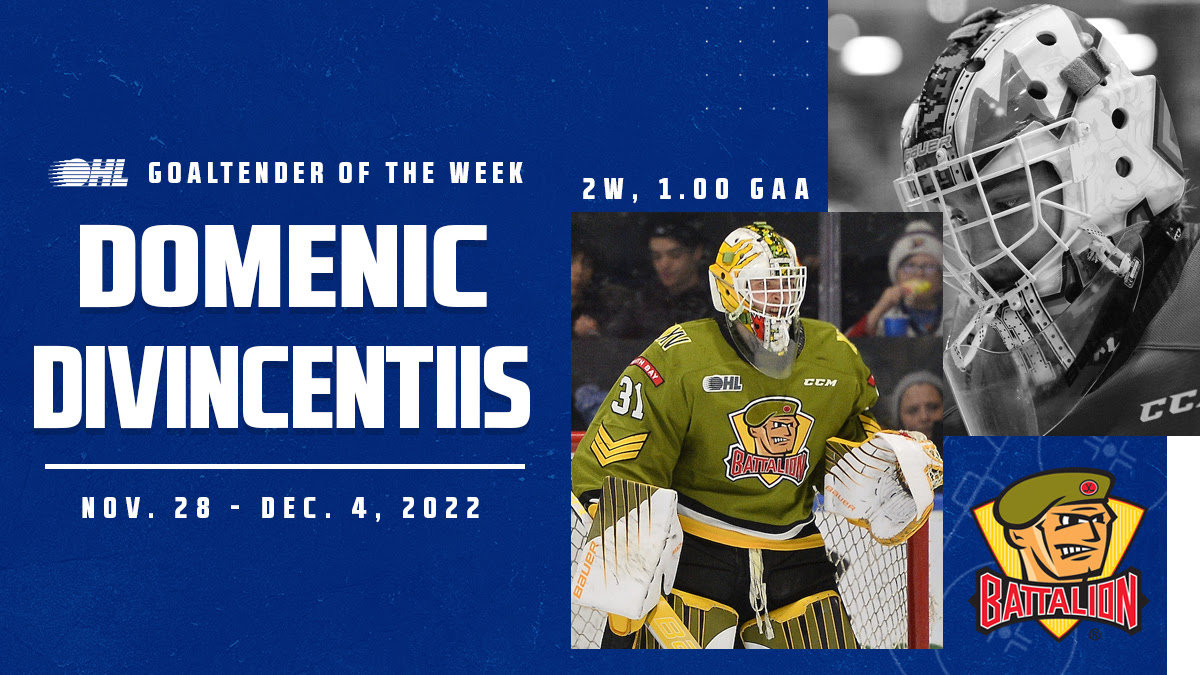 Winnipeg Jets prospect Dom DiVincentiis of the North Bay Battalion is the OHL Goaltender of the Week with two wins, a goals-against average of 1.00 and a save percentage of .967.

Defending the crease in back-to-back road wins, DiVincentiis turned aside 20 of the 22 shots he faced as the Battalion defeated the Kingston Frontenacs 4-2 on Friday. DiVincentiis was back between the pipes on Saturday, backstopping the Battalion to a 3-0 win over the Peterborough Petes where he made 38 saves to earn his first career OHL shutout and first star honours.

OHL Player of the Month – Sasha Pastujov (Guelph Storm):
Anaheim Ducks prospect Sasha Pastujov of the Guelph Storm is the OHL Player of the Month for October, sitting tied for the League-lead in both goals (10) and points (17) through 10 games this season. Pastujov is tied for the OHL’s second-most shots on goal with 44 and also scored a pair of game winners as the Storm played to a mark of 5-4-1-0. Pastujov wasted little time scoring his first career hat-trick, lighting the lamp three times on Oct. 9th as Guelph fell to visiting Kitchener 5-4. He proceeded to record points in eight consecutive games from Oct. 9th to 29th, headlined by three points (2-1–3) on Oct. 28th as the Storm fell to the Windsor Spitfires 6-3 before posting a season-high four points (3-1–4) on Oct. 29th in a 9-4 win over Owen Sound. Pastujov earned star of the game recognition four times, including a pair of first star and second star designations. He’s the first Storm player to earn OHL Player of the Month honours since Robby Fabbri last did so in February 2014.

An 18-year-old product of Bradenton, Fla., Pastujov has embarked on his first OHL season after being selected in the third round (66th overall) by the Anaheim Ducks out of the U.S. National Development Program last summer. A former World Under-17 Hockey Challenge silver medalist and IIHF World Under-18 Hockey Championship standout representing the United States, Pastujov was originally Guelph’s 14th round (276th overall) pick in the 2019 OHL Priority Selection.

OHL Defenceman of the Month – Jack Thompson (Sudbury Wolves):
Tampa Bay Lightning prospect Jack Thompson of the Sudbury Wolves is the OHL Defenceman of the Month for October, leading all blueliners with 16 points including four goals and 12 assists over 11 games. The League’s inaugural Player of the Week to start the season, Thompson leads the OHL with 50 shots on goal, is one of three defenders to score twice on the power play and is the lone rearguard to score a shorthanded goal this season. The Wolves captain registered three points (1-2–3) in his opening game of the season as Sudbury defeated visiting Peterborough 6-3. He followed that up with a career-high four points (1-3–4) as the Wolves skated to a 6-3 win in Sault Ste. Marie on Oct. 9th. He scored the deciding goal in Sunday’s 3-1 victory over North Bay. Thompson has recorded points in nine of his 11 games this season and earned star of the game recognition four times throughout October, twice being named first star along with one second and one third star designation. Thompson is the first Wolves defender to earn the honour since Frank Corrado in October 2013.

A 19-year-old native of Courtice, Ont., Thompson is in his third season with the Wolves having put up 64 points (23-41–64) over 126 career regular season contests with the franchise. He was a third round (93rd overall) pick of the Tampa Bay Lightning in the 2020 NHL Draft before spending part of the 2020-21 season with Surahammars IF of Sweden’s HockeyEttan circuit. Thompson made his pro debut with the AHL’s Syracuse Crunch last season, recording an assist in his lone contest. He signed an entry-level NHL contract with the Lightning on May 19, 2021. The right-shot rearguard was originally Sudbury’s second round (30th overall) pick in the 2018 OHL Priority Selection from the Clarington Toros U16 program.

OHL Rookie of the Month – Calum Ritchie (Oshawa Generals):
Calum Ritchie of the Oshawa Generals is the OHL Rookie of the Month for October, leading the field with 12 points including seven goals and five assists in 10 games. Ritchie also led rookies with 44 shots on goal and is tied for the most game winning goals with two. He opened his OHL career with goals in five consecutive games from Oct. 8th to 17th, recording a season-high four points (2-2–4) in a 6-3 win over the Peterborough Petes on Oct. 17th. The four-point performance made Ritchie the youngest General to accomplish the feat since Michael Dal Colle back on Nov. 4, 2012. His five-game goal-scoring streak brought him in line with John Tavares, who had a similar run during his exceptional status rookie season in the month of January 2006. Ritchie rounded-out the month by scoring the third period game winner on Oct. 28th in North Bay as the Generals skated to a 3-2 win.  He becomes the first General to earn OHL Rookie of the Month honours since Allan McShane last did so in January 2017.

A 16-year-old native of Oakville, Ont., Ritchie is a graduate of the Oakville Rangers U16 program, a team he captained before being chosen second overall in the 2021 OHL Priority Selection this past June.

OHL Goaltender of the Month – Brett Brochu (London Knights):
Brett Brochu of the London Knights is the OHL Goaltender of the Month after leading OHL netminders with a 2.07 goals-against average, .935 save percentage and an undefeated 8-0-0-0 record in the month of October. He also stopped 11 of 12 shootout attempts. Brochu put forth three different first star performances against the Owen Sound Attack including an Oct. 8th opening night 3-2 shootout victory that included 28 saves and four shootout denials. He was sharp against the Attack once again on Oct. 22nd, making 36 saves in a 2-1 win on home ice. Brochu turned back Owen Sound a fourth time in the month on Oct. 27th, making 32 saves in a 4-1 road win. The OHL Goaltender of the Month honour is Brochu’s third in a row dating back to January and February of 2020 prior to the season being halted due to the Covid-19 pandemic.